Former infantryman Ryan Berk was at a local mall when he recorded this video of a confrontation between himself and what he believed to be a fake Army Ranger; Berk’s guess was the purported fake soldier was trying to score Black Friday discounts. According to guardianofvalor.com, the ‘Soldier’ in fatigues is Sean Yetman, who is not an Army Ranger.

According to the site, 26-year-old Berk, who is from Easy Co 2/506 101st,  was shopping at Oxford Valley Mall when he spotted a guy wearing fatigues with a combination of military regalia that is not possible for a soldier to have — that’s when Berk hit record on his cell phone and began asking questions.

Berk: “Hey, sir? My son would really like to meet you; he really.. uh.. admires guys in the Army.”

‘Soldier’ leans down to shake hands.

Berk:  “Where’d you get your three CIBs at?”

Suspicion must be mounting at this point.

Berk:  “You know you have to be in three different campaigns to get three CIBs, right?”

‘Soldier’ has to look down at his collar for a sec.

‘Soldier’:  “This one is from Afghanistan…”

And then, ‘Soldier’ blows it.

‘Soldier’:  “And that one’s from my second rotation back to Afghanistan.”

Berk:  “You know no matter how many you do, you can only get one.” 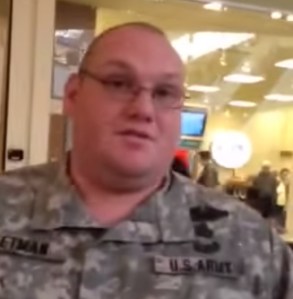 ‘Soldier’:  “Because my campaign took me outside of mission lines from Afghanistan.”

‘Soldier’ proudly shows him the patch on his left sleeve.

Berk moves the camera over to the right sleeve of the fatigues. Uh oh. Can you guess what’s coming next?

Berk:  “Where’s your combat patch at?”

Is that the end of it? Not a chance.

Berk: “Why’s your flag so low on your shoulder? It should be up here.” Berk is pointing to the shoulder of the uniform, which ‘Soldier’ seems to find interesting.

Hey, it’s Velcro! ‘Soldier’ pulls the flag patch from his sleeve and puts it up higher.

‘Soldier’:  “Because I literally just got home.”

I could have thought of an answer faster than ‘Soldier’ did on this one, for the record.

Berk:  “Fort Lewis? Is that where the Rangers are?”

I’m sure this is a trick question! Even I would know not to answer it — it’s a trap!

Berk:  “How come…. where’s your shirt underneath? Your tan t-shirt?”

‘Soldier’ starts digging under his collar and tries to find a tan t-shirt he can pull up to where it shows.

He may as well say he’s a Ghostbuster at this point.

Staff Sgt. ‘Soldier’ is still digging in his collar for a t-shirt.

Berk:  “You know the infantry only goes to Fort Benning, right?”

‘Soldier’:  “Yeah. For Ranger training. I didn’t start off…”

‘Soldier’ is now suddenly distracted by his cell phone.

Berk:  “What’s the actual MOS for that, for a driver?”

Don’t answer that, ‘Soldier’ — just don’t answer! We all know you’re going to get it wrong. 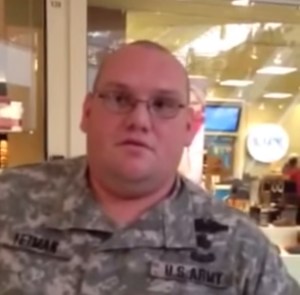 ‘Soldier’ pulls out his cell phone again and looks at it. But apparently, it doesn’t have the answer, either.

‘Soldier’ apparently has to take a call.

‘Soldier’ to Berk:  “Okay, listen. What we’re gonna do is we’re gonna step down here with my sergeant major.”

Berk:  “All right. Let’s go. Let’s see your sergeant major. So you shop at the mall with Sergeant Major on Black Friday?”

So they walk a few steps.

‘Soldier’:  “Let me tell you something. If I was a phony, then I wouldn’t be wearing this uniform.”

Berk:  “Because you are a phony. I just called you out about 10 different things…”

And then… the highest commander (at the mall) steps in. We hear a woman’s voice telling Berk to cool it.

No answer from ‘Soldier’ as he walks away.

According to Army Times, Army Human Resources Command could find no record of a Sean Yetman in the Army. The site also reports Yetman was convicted in 2003 for impersonating a public servant.

How Dark and Lovely is closing the opportunity gap …

WATCH: how to ‘nutrition’ your way into the new year

Are sick days over for remote workers?

Next Mega Millions jackpot will be 13th-highest ever

Biden’s pledge to appoint Black woman back in spotlight …

Where to get free N95 masks from govt. program

WATCH: How to ‘nutrition’ your way into the new year