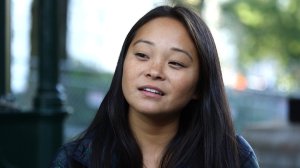 Anais Bordier and Samantha Futerman have the same laugh and the same freckled cheeks. They wear their hair the same way and have since they were babies. They share a hatred of cooked carrots, a love of the same color nail polish and they need to sleep 10 hours a day.

The pair tease, poke and prod each other like they’ve grown up together, but they didn’t. Neither woman knew she had an identical twin sister until less than two years ago.

That’s where the power of the Internet, a lot of luck and a series of “what ifs” enter the picture.

Bordier, who grew up in Paris, is an aspiring fashion designer who was studying in London. On a Saturday in December 2012, while she was on a bus, a friend sent her a screen shot of a YouTube video featuring Futerman, who is an actress.

“I’m automatically thinking, ‘Oh, who posted a video of me on YouTube?’ ” she said with a laugh. The resemblance was uncanny. When she got home, she looked again and realized it wasn’t her but a girl who looked exactly like her who lived in the United States.

She looked for credits on the video to find the woman’s name but couldn’t find anything, so she dropped the matter.

That was until the same friend who sent the screen shot said he saw the girl from the video in a movie trailer, also on YouTube, about a month later.

Bordier’s investigative instincts kicked into overdrive. She learned Futerman’s name and discovered they shared a birthday and were both adopted in South Korea.

“I stalk her a little bit more, learn that she was actually born in the same port city in Korea, and yes, started looking through all her pictures.”

She got up her nerve and decided to contact Futerman via Facebook, sending her a friend request and a message. 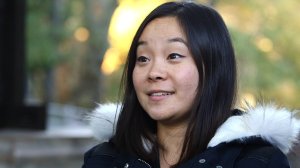 The similarities between her story and the film “The Parent Trap,” featuring Lindsay Lohan in the most recent version, were not lost on Bordier. She wrote in her message to Futerman: “I don’t want to be too Lindsay Lohan, well … but … how to put it … I was wondering where you were born?”

Futerman, who was raised in Verona, New Jersey, and who has two brothers (her parents’ biological sons) and a half-brother from her father’s previous marriage, at first didn’t know what to make of Bordier’s friend request and message.

“It’s pretty strange to get a message from yourself on Facebook,” she said. “It’s a really weird experience.”

It took her a few days to respond.

“I thought, ‘Wow, this could actually be true,’ ” Futerman said.

The first time they talked on Skype, they were supposed to chat for 90 minutes but ended up talking for three hours — a conversation that proved to be life-changing.

“We were 25 at the time, and it’s like that quarter-life crisis thing when you think it’s all downhill,” Futerman said. “I have to buy my health insurance. I’m getting kicked off my parents’ (plan). There’s nothing good any more, and then it teaches you that anything’s possible.”

For Bordier, an only child, discovering she had a sister was amazing, but realizing that she had a twin was “even crazier, because you have so much in common.” 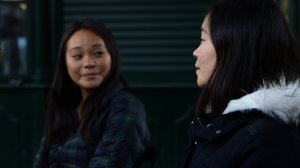 A DNA test proved what they already knew — that they were, in fact, twins — and now they planned to meet in person for the first time in London.

“The only way to explain it is being the most intense long-distance relationship and talking over months on social media and Skype,” Futerman said.

But connecting on the Internet was one thing; meeting in person was “still really scary,” she said.

Bordier said she found herself at that first meeting needing to keep her distance, because it all felt “very strange,” but at the same time wanting some proof that her identical twin sister was real.

“So I just poked her,” she said during the interview, at which point they both laughed. That same laugh.

Their reunion, which they each chronicle in alternating chapters in the book, is also part of a documentary, which they are producing and hope to release next year.

The support they have received as their story has gotten national attention and the interest they have had from other adoptees and twins have motivated them to try to raise awareness and provide resources for international adoptions.

“It inspired us to become something bigger than just ourselves and to share our story for a reason,” Futerman said.

She and Bordier have teamed up with Futerman’s friend, fellow actress Jenna Ushkowitz, a Korean-American adoptee and cast member on “Glee,” to start a foundation called kindred. The foundation is focused on helping adoptees, both in the U.S. and worldwide, with family reunions and any other issues they might encounter.

“It’s such a joy to find your family,” Bordier said. “I guess when you’re adopted, you’re always looking for somebody that looks like you, that will understand you.”

Both women say their parents are delighted with the news, although they were upset initially, since neither set of parents knew the girls had a twin. Their adoption papers list their births as a single birth, they said.

“Of course, my mom was very protective and said, ‘We would have taken both of you’ when they felt that we were missing out on growing up together,” Futerman said.

They have tried to reach out to their birth mother but reveal in the book that she has not been interested in connecting with them.

“If we’ve learned anything in this story, it’s that things will happen as they should,” Futerman said. “And if one day she wants to reach out to us, then we’re here, and we’re willing, and we’re ready.”

Though they still live halfway around the world from each other, Bordier in Paris and Futerman in Los Angeles, they text multiple times every day.

“Basically, I wake up to 20 text messages, ‘What are you doing?’ ‘I’m on my way to work.’ ‘It’s cold out,’ ” Futerman said. “It’s just completely arbitrary things that happen during the day. And it’s constant.”

Bordier says Futerman is always waking her up in the morning via text because of the time difference. She’ll get messages like, “Wake up, you’re late,” she said.

“It’s amazing to feel that someone is always awake somewhere in the world, and you feel protected,” Bordier said.

They may have been torn apart as babies, but they say they are now forever bonded.

“We’re not worried about being separated again,” Futerman said.

What do you think about the twins’ story? Tell Kelly Wallace on Twitter or CNN Living on Facebook.

Aspiring teen rapper shot and killed in Fort Worth home