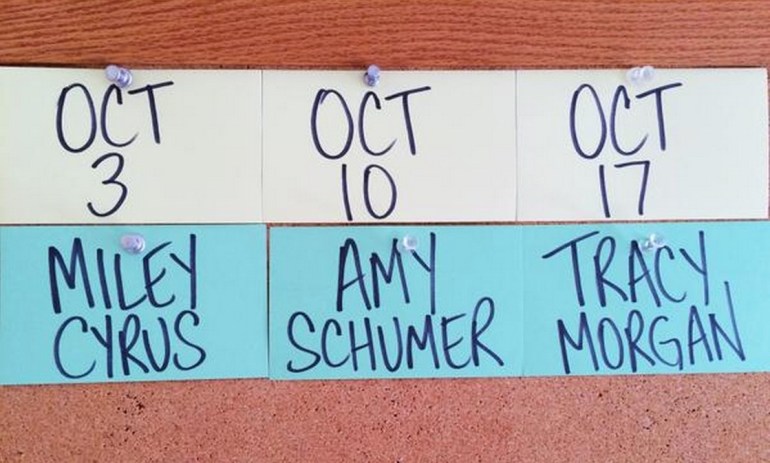 Morgan will return to Studio 8H on October 17 for his second time as host. As a former cast member, Morgan earned acclaim for his seven seasons on “SNL” and was Emmy nominated for his role on the award-winning comedy series “30 Rock.”

SNL will celebrate the start of its 41st season on October 3 with Miley Cyrus returning as host for a third time. The Grammy Award-nominated and chart-topping artist will host the MTV Video Music Awards on Aug. 30.

On October10, Amy Schumer will make her hosting debut. Schumer is coming off her summer box office hit, “Trainwreck,” in which she both wrote and starred. She stars in the TV series, “Inside Amy Schumer,” and her upcoming comedy special, “Amy Schumer: Live From the Apollo,” premieres October 17.

Morgan, The “30 Rock” and former “Saturday Night Live” star, was seriously injured last June after a Wal-Mart truck slammed into the limo occupied by Morgan and four others on the New Jersey Turnpike. The collision killed Morgan’s long-time friend comedian James McNair and injured the other passengers. Morgan was hospitalized with broken ribs, a broken nose, a broken femur and a broken leg.

Earlier this month, it was revealed the truck driver’s fatigue — exacerbated by his decision to drive 12 hours to work before he even started his 14-hour shift — likely caused the crash, federal officials said.

Musical guests will be announced at a later date.

Family hopes Tyler nurse will be charged with another murder