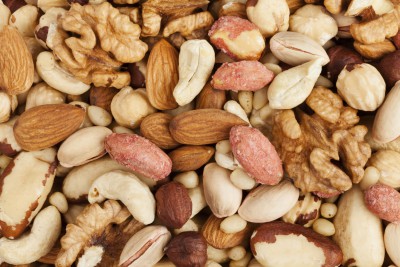 Sure, it might look like I’m shoveling down a weeks worth of calories in peanuts in one sitting, but I’m really dieting.

Snacking on them three to four times a week could help lower one’s BMI, researchers report in the Journal of Applied Research on Children.

Researchers from the University of Houston, Baylor College of Medicine, and Texas Woman’s University followed 257 Latino adolescents—who were in the 85th percentile or greater for BMI—over a six-month period.

During that time, about half the group snacked on peanuts or peanut butter right after school three to four times a week; their counterparts had the same snack less than once a week, and all children received nutrition education and engaged in physical activity.

The researchers found the peanut-heavy group reduced their BMI more than twice as much as the other group over the course of the study.

“Obesity is the most pressing health issue facing us today,” study co-author Craig Johnston says in a press release. “We’d like to think it’s preventable, but from where I sit right now, there hasn’t been a lot shown to be very effective on a large scale.”

He says that snacking on peanuts offers a “creative” solution that can help people manage their weight, appetite, and hunger, and as Houston Public Media notes, peanuts are more universally liked than health foods like carrots.

Meanwhile, Huffington Post reports that while just about any nut can make for a healthy, fat-filled snack (yes, peanuts are technically a legume…), almonds have the benefit of packing the fewest calories. (Scientists have just engineered an even healthier peanut.)

This article originally appeared on Newser: Snacking on Peanuts May Help Obesity Epidemic