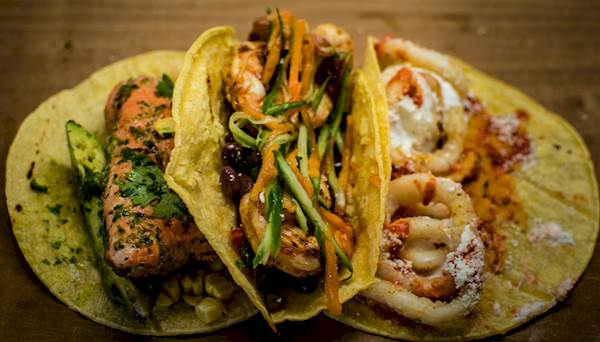 They may not have started in Texas, but any taco connoisseur knows the best tacos can be found in the South. This is a duly noted reality, mainly because of our diverse population, or perhaps because of our love affair with Tex-Mex.

An interesting fact about tacos: The word is not Spanish nor can it be positively identified as Mexican. There’s speculations about the root of the word ranging from origination in Mexican silver mines to Aztec derivations from “tlahco,” which means half or in the middle. What can be proven is that tacos were a food of choice that predates the European arrival in the Americas. All of these theories serve to prove one point: for hundreds of years, tacos have reigned at the top of food chain.

Most Texans don’t care about where the word came from, we just care about the taste of our food. In Dallas, the competition for the perfect taco is fierce. From gas station taquieras to fancy Uptown joints with tofu, Dallasites have a multitude of options. We have bistro tacos and hand-rolled flautas and taquitos. We choose between corn and flour tortillas, and fuss about how many containers of salsa roja and verde are in our bag. We know how to say “no cebollas,” or “con lechuga” in perfectly Texanized Spanish, and we all have our favorite taco spot.

Let’s take a look at a few of the city’s best — we’re sure all of these will have you hungry for more.

If you don’t know about Fuel City tacos, then either you’re not from Dallas, you don’t eat tacos, or you’re a fraudulent taco connoisseur. No matter the night, no matter the day, the line outside of this 24-hour Mexican taco stand is guaranteed. However, the taste of one of their authentic street tacos is worth the wait. Labelled as the “greatest tacos ever sold,” there’s no doubt that any taco snagged from Fuel City will make your taste buds happy, but a few stand out as crowd favorites.

Fuel City makes honest tacos with no fanfare; their food is simple, freshly prepared with an extra dose of delish. The picadillo, which is the ground beef with diced potatoes and green sauce served on a corn tortilla, or the beef fajita, cooked with onions, are not risque. They’re just scrumptious bites of taste heaven. Fuel City proves that you don’t always have to add extra ingredients to have fine food, you just have to know how to cook the food you have.

The slow-roasted Angus brisket taco at the Velvet Taco is a necessary experience in your life. While every taco in this phenomenal restaurant has been created with mouth-watering finesse, this barbacoa-style taco is a masterpiece of perfectly blended flavor. Avocado relish, red chili mayo, queso blanco, micro cilantro and a cheese-encrusted tortilla. If that doesn’t sound like heaven to a meat-eater, what does?

For the vegetarians, there’s tofu, paneer, and falafel tacos, and even though most of us taco eaters are all about the meat, those veggie ones taste pretty good too. However, an in-the-middle choice would definitely be the cornmeal fried oysters taco. Not only is this a divine combination of hot and cold (the oysters and napa slaw), the rest of the combined flavors, especially the hibiscus corn tortilla, turn this oyster taco into an oyster experience.

You can’t have Torchy’s tacos without having a Trailer Park, extra trashy (superb with the lettuce left on), although the fried avocado (add chicken) is a close runner-up. It’s only been ten years since Michael Rypka arrived on the Texas scene, but this taco-slinging restaurant has spread across Texas, and now boasts thirty locations.

Even though their meat tacos are insanely good (or damn good, if you ask the owner), the vegetarian styles are also mouth-watering confections. The Independent, which consists of battered and fried portobello mushroom strips with refried black beans, roasted corn, carrots, queso, cilantro, and avocado is a vegetable taco dream.

In Tacos We Rust

As with many of the more popular taco spots, Rusty Taco has minimal ingredients with big taste. This taco restaurant has only been around for six years, but four states and fourteen locations prove that Rusty makes one awesome taco. Recommendations at Rusty’s abound, but the fried chicken and the baja shrimp take the win.

The baja shrimp only needs five things to create a tantalizing combination: crispy shrimp, creamy baja sauce, red cabbage, and cilantro. On the other hand, the fried chicken, also a five-ingredient taco, boasts of fried chicken, of course, jalapeno ranch, slaw and cilantro. The fifth ingredient for both confections, necessary for any self-respecting taco, is the tortilla. Make your choice between flour or corn.

Our California Heat taco is filled with shrimp, bacon, avocado, feta, shredded cheese, pico de gallo and sriracha-lime sauce. If that doesn't transport your taste buds, we don't know what will! #FuzzysTacoShop

On first glance, it doesn’t seem like feta cheese is a good idea for a taco. Seriously, who’s ever heard of a baja taco? The answer to that question is: anyone who’s been to Fuzzy’s Taco Shop, and that means many, many people. In only thirteen years, Fuzzy’s has opened 95 stores in eleven states. The statistics don’t just speak volumes, they shout them from the rooftops, and every word screams, “Baja tacos!”

Although every taco found at Fuzzy’s Taco Shop is the definition of flawless to someone, the California Heat taco is a blend of delectation. Made soft or crispy with grilled or tempura shrimp, bacon, avocado, feta, shredded cheese, pico de gallo, and Sriracha-lime sauce, this ingenious taco clearly defines why Fuzzy’s has been so successful.

Three years ago, Claudio Vera opened El Charrito’s in a small gas station taco stand inside Shell in North Dallas. On the outside, the business wasn’t expected to last. There was no giant sign, and no blaring advertisement of the tacos available — only word of mouth, and though word sometimes travels slowly, in the case of El Charrito’s, there’s never a lack of a line of patient customers awaiting their food.

While Claudio offers a vast variety of tacos, burgers, and other food, his choriqueso taco is a handmade creation of excellence. Chorizo, queso, cilantro, onions, and a freshly cooked, corn tortilla makes for a savory mix in every bite. The best part of El Charrito’s service is that Claudio himself is at the grill, focusing on perfection in every bite.