The USMC is saying N-O to a lot of popular body art — but not all of it. The Marines overhauled their tattoo policy, issuing a 12-page set of rules with the goal of seeking “to balance the personal desires of Marines with high standards of professional military appearance and heritage,” according a statement posted on its website.

The Marine Corps’ new tattoo policy is stricter than the Army or Navy, but it also eased some restrictions on tattoos.

The good news for tat fans is that Marines can have an unlimited number of tattoos!

Tattoos on “the head, neck, inside of the mouth, wrists, knees, elbows, and hands” are no longer allowed, with one exception: A single band tattoo of no more than three eighths of an inch in width is permitted on one finger.

In the past year, policies on body art have undergone varying changes across military services, primarily to take into account the increasing number of young potential recruits who are getting tattoos.

Because the elbow area is off-limits, the new rules mean Marines cannot have full sleeve tattoos — often stretching from the shoulder to the wrist — which have become popular among military service personnel.

To avoid any misinterpretation, the Marine Corps published the detailed illustration with designated red zones where tattoos are NOT allowed. 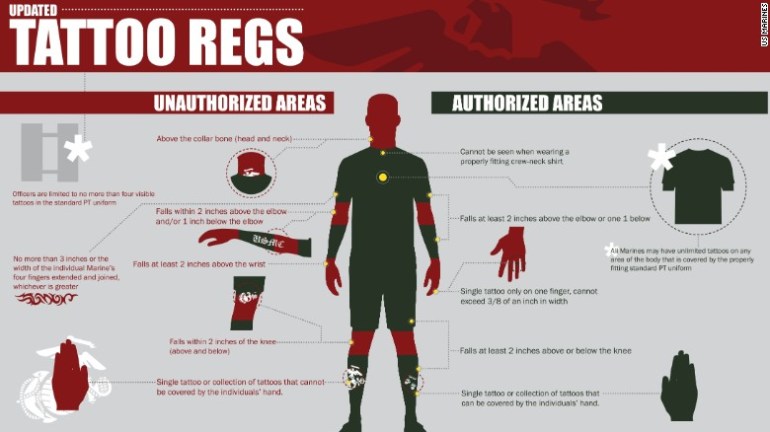 The Marine Commandant “wanted the policy to allow Marines freedom and flexibility to express themselves while also being clearly written and understandable for both Marines and their leadership,” said Sergeant Major Ronald L. Green, Sergeant Major of the Marine Corps.

The rules vary depending on rank, too.

Officers “are limited to no more than 4 visible tattoos in the standard PT (physical training) uniform,” whereas enlisted personnel have no such restriction, Yvonne Carlock, Deputy Public Affairs Officer with Manpower & Reserve Affairs, told CNN.

One of the changes loosened an existing rule that allowed band tattoos of no wider than two inches; now they can be up to 3 inches in width.

In terms of the type of tattoos that are barred, the rule remains the same: Tattoos that express “sexism, nudity, racism, vulgarity or anything that is offensive” are forbidden.

The Navy is more lenient than the Marines about tattoo locations — it allows sailors to have neck tattoos, full sleeve tattoos and does not restrict the size or amount of body art below the elbow or knee. The Navy’s more relaxed policy, issued in March, was intended to “ensure the Navy does not miss opportunities to bring in talented young men and women who are willing to serve,” according to a statement on its website.

Similarly, the Army, which updated its policy last year, no longer restricts the size or amount of tattoos on soldiers’ arms or legs.

The U.S Air Force is currently reviewing its tattoo policy and hope to have new recommendations by fall.

Marines who do not follow the new rules will be held accountable and regular spot checks are to be expected, officials said.

“Marines should understand that violating any policy has consequences and leadership will hold Marines accountable accordingly,” Green said.