DISCRETION ADVISED: Some viewers may find language in this video offensive.

Something upset a kid so much, he had to work out his rage by walking through a Dollar General store, tearing it up aisle-by-aisle — much to the bewilderment of the store employees and other patrons, who obviously had no idea how to react.

One person did, though. He started recording cell phone video and offering play-by-play of the perpetrator, heretofore known as ‘Jit,’ as he goes HAM (I looked it up — it means ‘hard as a motherf****r’) on a vandalizing reign of dollar store terror.

SuperkenGaming posted the video to YouTube and the rest is history, with about half a million views so far.

Here’s what we can tell from the video: 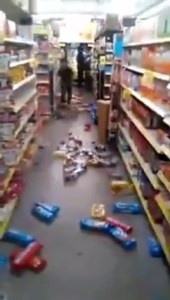 Jit = little sh*t, young one who doesn’t know sh*t. (No doubt evolving from the likes of punk, thug, hoodlum, etc.) We don’t know the boy’s real name, so we have to settle for referring to him as Jit.

As in, ‘He’s in deep jit for tearing up this store.’

‘His mama is going to beat the jit out of him when she finds out.’

‘Holy jit, who’s going to clean up this mess?’

The nightmare on “Jit Street” is already underway when a store patron starts recording and offering commentary. “Boy, we got Jit goin’ here in the Dollar Store. I’m talkin’ ’bout Jit going HAM in the dollar store. Believe dat!”

The citizen journalist and budding photographer approaches Jit and is greeted with cereal boxes flying at him; the up and coming vandal has a decent throw.

Turns out, the photographer is also an amateur psychologist. “Jit is mad. Jit don’t got no family; Jit say ‘F*** this sh*t.'”

The photographer rounds a corner to follow the action, clearly delighted with the breaking (get it?) news he has come upon. “I ain’t caught nothing like this in a while.” The guy has to step over downed boxes of cookies littering the floor while capturing the ongoing malais. “Hey, I’m talking like, bruh, like Jit,” as Jit pushes over a large inventory cart full of merchandise.

Jit does a number on the home organization aisle, pulling down storage bins, stacks of waste baskets, laundry baskets…. all to the continuing amusement of the photographer trailing behind. “Ah, Jit! Nobody knows whose jit this is! Hey, Jit! Like, Jit is going HAM!” 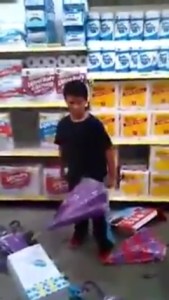 Then, Jit finds an umbrella. Now there’s a weapon. Granted, it’s small, plastic, and purple. But it’s still got a point and a handle for solid grasping as Jit moves toward his dollar store paparazzi, ready to step into it and take a swing at the guy.

With a more serious but still lighthearted tone, the photographer tells Jit how it is. “You hit me with that and you’re going to lose your life.”

Jit has a change of plans and withdraws his saber-like baseball bat. I mean umbrella. But he does take a solid swing at a family pack of toilet paper on his way to the next aisle.

The photographer gives us a glimpse down the most recently vandalized aisle, showing what looks like an employee walking slowly through the debris.

“Look at this sh*t. The man in the store don’t even know what to do,” the photographer narrates.

We’re with the man in the store.

What do you do when an unsupervised kid is obviously having some sort of meltdown in your store? Your business is absolutely being vandalized, but… it’s a kid. What’s going on that makes this boy act this way? How do you stop him, how do you help him — should you help him? — and what about all the damage? Pretty sure Jit doesn’t have a job that will cover the expenses.

Not currently concerned with this, the photographer continues his impromptu documentary shooting and goes to find Jit. “I’m on YouTube for real! This jit get his a** beat.” Pretty sure everyone sees the same future for Jit. 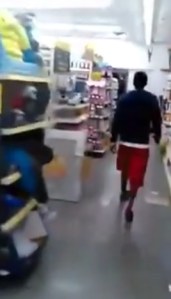 Finally, another guy stops his shopping and comes into the picture; he’s looking for Jit, too, but he’s got other ideas. He’s going to take care of business and end this. “Hey!” the new guy yells after Jit as the boy looks back. “You need to get up on outta here with this sh*t, man.”
Jit starts running, but the new guy’s got longer legs; he follows Jit into the back of the store — pretty sure that’s another violation of store policy — and the photographer follows as well, along with another newcomer to the adventure. 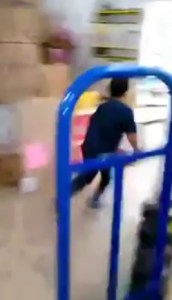 Turns out, tearing up the back of a store is just as newsworthy to tearing up the front part, and our photographer-commentator continues. “Jit tryin’ to tear up some sh*t. That’s what I told him. You fixin’ to get….” That’s when Jit flies right by the camera, back to the front of the store.

Is he fast enough to get away from the Good Samaritan trying to stop him from further destruction?

Probably not, but it’s not over yet. The photographer again predicts the future. “Jit goin’ HAM. He can’t stop. He goin’ to jail.”

A woman blocks the exit as others are picking up merchandise; blocked in, what do you think Jit does? He goes over and starts pulling down more merchandise, display and all.

Now, finally, even the photographer has had enough. 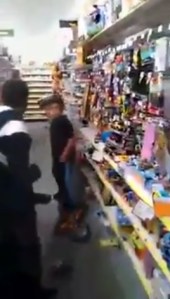 One of the onlookers from earlier, a boy seemingly older that Jit,  approaches. Jit reacts by raring back with a box he’s holding and yells, “Get back!”

Where’s that Good Samaritan guy who was going after Jit to stop him??

Oh, wait. Here he comes — from behind. Jit is so preoccupied with threatening the older boy, he never sees it coming. Jit is yelling, “I ain’t afraid to do it!” 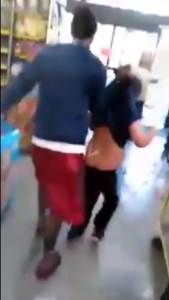 Suddenly, Jit is grabbed from behind. The Good Samaritan scoops up Jit and says, “Good. I’m glad you ain’t afraid ’cause I ain’t, either.”

Movie screenwriters couldn’t come up with a better line than that one!

And with that, Jit is carried out of the camera’s view, toward the front of the store.

“Come on, let’s go,” the Good Samaritan tells him as he leads Jit by the back of his shirt, right out the front door, as a woman tells them an authority of some sort is on the way.

The photographer verifies his earlier prediction. “I told her! He need his a** whooped!”

Although he struggles a bit, Jit seems to have accepted that the Good Samaritan is bigger and stronger and is not going to loosen the grip he has on the back of Jit’s shirt until authorities arrive. 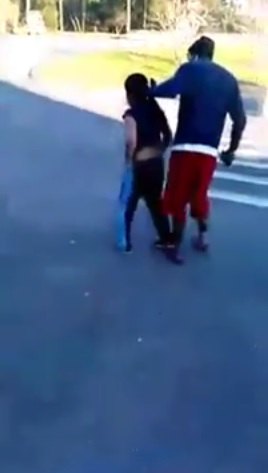