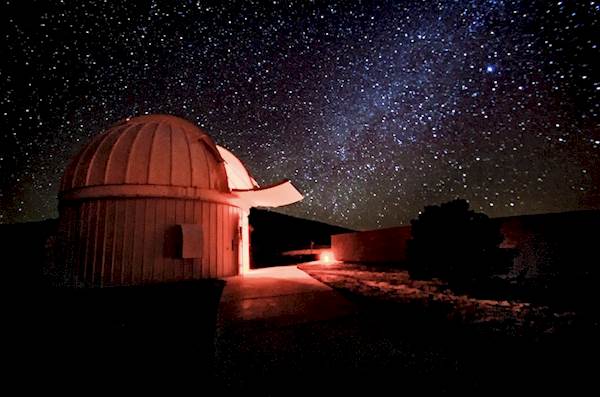 Life in the DFW metroplex may have everything, but one drawback is the lack of open space to see the night sky. The galaxies, planets, and stars are hidden behind a mask of light pollution, and unless you’re savvy enough to understand the light pollution maps, trying to figure out where to stargaze is a word of mouth or extensive research mission.

The best part of this is that you are not alone. DFW is full of amateur astronomy organizations that can be found at many of the colleges, larger groups, such as the Texas Astronomical Society of Dallas, and planetariums like the one at UT Arlington, where star-gazing can be completed with a telescope or show. However, if you are one of those people who prefer to pack up the car and drive, here are some open patches of starlit perfection near DFW just waiting for you.

While you’re not guaranteed to catch a falling star, you just might get the chance to make a wish at one of the many state parks in Texas. A safe way to grab a bit of nature away from the city, but still remain within a group, is to catch a star party with Texas Parks & Wildlife. Throughout the summer, TPWD has a calendar full of night sky and moonwalks that guarantee an informative, ranger or guide led adventure.

stars above the lake behind the cabin

If you’re up for a drive, Cooper Lake State Park has a reputation for being a convenient stargazing option. Just 90 minutes northeast of Dallas, Cooper Lake offers two different units of the park, one in Cooper and the other in Sulphur Springs. There are campgrounds with water, electricity, screened or air-conditioned shelters, walk-in campsites, or equestrian campsites for those with horses. Or, for those who would like to stargaze then return to civilization, Cooper even has cabins, complete with a kitchen and bathroom.

It’s a little bit of a drive, but two of the six Texas Parks and Wildlife properties to ever achieve International ‘Dark Sky’ status, by the International Dark-Sky Association, are just under four hours away from DFW. Enchanted Rock State Natural Area and Copper Breaks State Park offer many of the same activities as other TWPD parks, but have a few differences, as well.

At nearly 2000 acres, Copper Breaks is a large space in Hardeman County. The park hosts a portion of the official Texas longhorn herd and has some natural and historical exhibits. Because of its size, the park is able to offer more interactive choices for locations to stargaze, including 24, 8-people campsites with water, electricity, and grilled fire rings.

Enchanted Rock is slightly smaller than Copper Breaks, but definitely more serious about their star-gazing. While both parks have a real-time sky darkness meter that takes readings throughout the night, Enchanted Rock posts its measurements on the park’s TPWD page every fifteen minutes after dark. The page explains how to understand the measurements and even goes into an in-depth explanation of the Bortle Scale, which measures how well a person can see stars with light pollution and sky glow interference. Although the park offers many of the usual activities and attractions, stargazing is at the top of their list.

If you’re not up for a long drive or camp stay, Dinosaur Valley State Park can do the trick. Though the park is not a “dark sky” location, it ranks somewhere in the middle on the Bortle scale and guarantees a good view of the stars above the horizon. The park, which has 20 miles of trails, features dinosaur tracks in its riverbed, and quite a few places to watch the night sky.

Ranking along the same Bortle scale as Dinosaur Valley, Lake Mineral Wells State Park is only an hour and a half drive from DFW. The 640-acre lake has a boat ramp, and small or large boats for rent. With 12.8 miles of park trails, a 20-mile Trailway, and Penitentiary Hollow, a natural rock climbing venue, there are plenty of places to catch a nice view of the pre-show sunset over the water before being awed by a magnificent star display.

Skies Are Prettiest at Purtis

Just an hour from DFW, Purtis Creek State Park, the location of a 355-acre lake, is known as a bass fishing destination, but fishing isn’t all there is to do there. The park has boat rentals for those who like to canoe, kayak, or paddle boat, camping, hiking, and of course, star gazing. While Purtis is pretty average on the Bortle scale, the views it offers are more than awe-inspiring and worthy of a nod from the experienced and inexperienced eye.

Last night while observing and photographing our "mini" Moon.. I was able to get this photo of Jupiter and three of it's four Galilean moons! Coming from Jupiter out: Europa, Ganymede..and Callisto.. Io is lost in Jupiter's glare: 11:07pm 1/14/2014

If you go by its Bortle scale, Cedar Hill State Park is pretty low on the totem pole. However, its location just 20 miles from downtown Dallas, and 30 miles from downtown Fort Worth, makes this one convenient park. 1200 acres of trails, 350 developed campsites and a 7500-acre lake make the amenities of this Park pretty alluring to the average park goer. For the stargazer, catching sight of the universe reflected across Joe Pool Lake is a vista worthy of reflection, and who needs to see every aspect of the stars when a million of them create the landscape?

No matter which location or organization you choose, Texas offers a plethora of options for any and every stargazer, be they novice or advanced viewers, or amateur or experienced astronomers. So get out there and get to watching! The stars are waiting for you.

New Year’s goals for children, family to create together

Cardi B to help pay for funerals of NYC fire victims

Women in Tech and Innovation Forum set for Feb. 8, …

Who will win, Cowboys or 49ers?