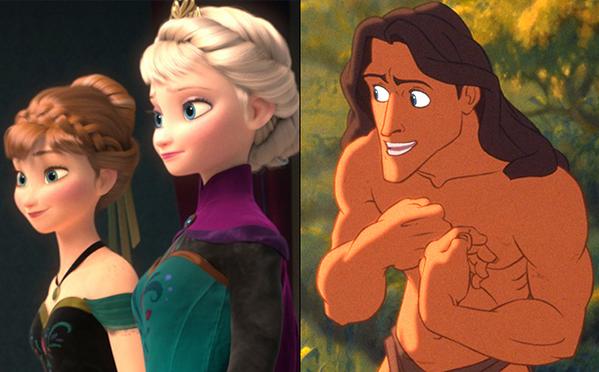 Disney, stop playing with our emotions.

There may never actually be closure when it comes to the fan theory that the animated star of “Tarzan” is the little brother of Elsa and Anna from “Frozen.”

It all started when “Frozen” co-director Jennifer Lee shared during a Reddit AMA that her co-director, Chris Buck, didn’t believe that the parents of the “Frozen” princesses actually died on a boat lost during a storm.

No, Lee said that according to Buck, who also worked on 1999’s “Tarzan,” the king and queen of Arendelle were actually shipwrecked with their newborn son before being washed up on the shore of a jungle. There they built a tree house before they were tragically killed and eaten by a leopard.

Fans instantly recognized that as the story of “Tarzan.” But Buck recently told MTV News that he was spinning a tale for Lee that came out of his head as the pair headed into a meeting.

“I said, ‘Of course Anna and Elsa’s parents didn’t die,’ ” he said. “Yes, there was a shipwreck, but they were at sea a little bit longer than we think they were, because the mother was pregnant, and she gave birth on the boat, to a little boy.

“They get shipwrecked, and somehow they really washed way far away from the Scandinavian waters, and they end up in the jungle,” he further explained. “They end up building a tree house, and a leopard kills them, so their baby boy is raised by gorillas. So in my little head, Anna and Elsa’s brother is Tarzan — but on the other side of that island are surfing penguins, to tie in a non-Disney movie, ‘Surf’s Up.’ That’s my fun little world.”

But don’t worry. There’s still the theory that Elsa and Anna’s parents were heading to “Tangled” star Rapunzel’s wedding and that theirs is the shipwreck being explored in “The Little Mermaid.” That one hasn’t been debunked yet.

Which Disney Kingdom Should You Live In?

If you received unemployment benefits you could owe taxes