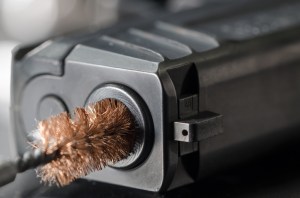 DELTONA, Fla. – A man was cleaning his loaded .22 caliber pistol in the living room of his Deltona, Florida home when the gun went off.

Yep, the loaded gun fired. But where did the bullet go? Michael Blevins, 37, wouldn’t know the answer to that question for three days — when he finally discovered a bullet hole in his arm.

According to the Daytona Beach News-Journal, Blevins had the firearm pressed to his chest to keep it away from his dog, and, when he stood up, a sharp pain in his back caused him to buckle forward. He heard the pistol fire and struck his face on the edge of a glass coffee table, he later told deputies.

Blevins said the only thing he felt was the throbbing cut above his left eyebrow from the table. Medication for an old back injury may have numbed the pain from the gunshot wound, he said.

In fact, he didn’t realize what had happened until he changed into a light-colored shirt three days later, which showed the blood seeping from his arm.

Blevins said he saw an entry and exit wound and went to the hospital for treatment. The wound had almost stopped bleeding by the time he noticed it.

After receiving treatment, deputies accompanied Blevins home to verify his story and determined he did indeed shoot himself, according to their report.

Only in Florida, amirite??