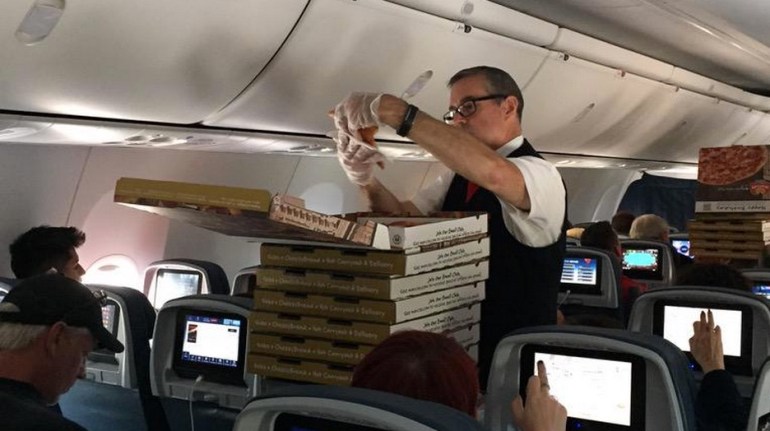 PHILADELPHIA — Diverted because of bad weather in Atlanta, a Delta Air Lines pilot and airport crew turned to the classic solution for many a grumpy passenger: pizza.

As torrential rains swept through Atlanta on Tuesday afternoon, some flights were delayed arriving at the world’s busiest airport — and Delta’s home base.

A 2 p.m. Delta flight from Philadelphia to Atlanta was diverted to Knoxville, Tennessee, because of the storms in Atlanta. Pizza delivered to the aircraft via baggage cart seemed to cheer everyone up, according to their social media posts.

“We are sitting on a runway stuck on a @Delta flight because of weather,” tweeted @RileyVasquez. “So they’re throwing us a pizza party!”

“Delta continues with class,” tweeted @BillyTheKidWitt. “Stuck due to weather and the crew ordered everyone pizza. #deltaairlines.”

Passengers on other delayed Delta flights reported similar feasts, and it turns out that the pizza was the result of a broader edict.

“It’s part of an effort company-wide when weather disrupts our operation to get food and beverages to delayed customers,” Delta spokesman Morgan Durrant said.

No word as to whether coffee and Delta’s famous cookies were served for dessert.

It was a bad weather day for both Delta and Atlanta’s busy airport.

Baker applauded the use of food to handle the potentially difficult situation. “A meal can go a long way to calming nerves, and it raises the observation that there were far fewer incidents of air rage when airlines gave out food and cocktails for free!” he said.