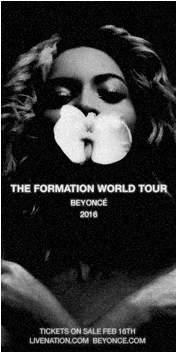 DALLAS — You probably know by now that Beyonce dropped a new single on Saturday, slayed it with Chris Martin and Bruno Mars at the Super Bowl on Sunday — oh, the Broncos won, btw — and was the subject of a press release by AT&T Stadium on Monday.

You didn’t catch that last part?

And you can start searching for tickets as early as TODAY (Tuesday, February 9), when special pre-sale begins.

Now do all of you who called in sick the day after the Super Bowl feel bad for not being able to call in sick tomorrow so you can try to get Beyonce tickets??

Very hard to pity you as the rest of us sit at work with shoes on and teeth brushed.

Tickets for the commoners officially go on sale Feb. 16, but if you’re a Beyhive member or an American Express cardholder, you can get pre-sale tickets starting at noon Tuesday through 5 p.m. Sunday.

Beyonce’s new video for Formation and her Super Bowl 50 performance are being criticized by some who don’t think law enforcement are being respectfully portrayed in either. Some took to social media after Saturday’s release of the video, featuring Beyonce atop a sinking New Orleans cop car in Katrina aftermath. Some took to social media to suggest boycotting the Super Bowl halftime show, but apparently Rudy Giuliani missed those posts.

“I thought that she used it as a platform to attack police officers, who are the people who protect her and protect us and keep us alive,” Giuliani said on Monday’s Fox & Friends. “And what we should be doing, in the African-American community and in all communities, is build up respect for police officers and focus on the fact that when something does go wrong, OK, we’ll work on that. But the vast majority of police officers risk their lives to keep us safe.”

We’re willing to bet the formation of Beyonce fans May 9 will fill AT&T Stadium to absolute capacity.

Traffic in Arlington is going to be a you-know-what.