Being a large metropolitan city does not help with the retention of a community. If you live in Dallas, you know how desolate it can get. To our benefit, the creation of social media has made it easier than ever to meet people with similar interests without having to leave the house or job or… wherever you are.

Of the many media outlets, Reddit has risen to become one of the most used forum sites in the world–mainly for the freedom it allows its users in creating just about any sort of thread. Any sort of thread. If you can’t find friends who share an interest in your love of Mexican food or your new short film, you are bound to find them in Reddit’s subreddits.

Here are eight subreddits worthy of following for their tendency to spark meet-ups all around Dallas or merely for creating a virtual environment where you are free to post anything within your interest. Seriously, anything.

From Lester Lorch Park in Cedar Hill to Jimmy Porter Park in Carrollton, people all around Dallas can be seen enjoying a game of disc golf week in, week out. Because there are so many places to choose from, the Dallas disc golf subreddit helps organize events and meetups for veterans and newcomers.

There are always friendly people inviting anyone interested to join them, so if disc golf is your thing, you might want to follow this thread–unless you already are. Make this a weekly routine and you might end up saying the same words this guy said: “Had a great time. Good seeing everyone again.” Or something like that.

Notorious for causing controversy on and off his radio show, Russ Martin made 91.7 The Eagle the station to listen to from 3PM-7PM daily. Having returned to The Eagle in 2010 after a ten-year hiatus, Martin embellished his show’s vulgarity with even more crude humor, which has garnered more than enough fans since the show’s inception to express nothing but love and admiration.

If you’re into guns, rock ‘n roll, and good ol’ dark comedy, this is the subreddit to follow. Recently, Martin has been very sick and absent from the show, but his co-hosts Dan O’Malley, Clo, and Alfie have been keeping the show’s spirit alive. Much like how this person explains it.

So you have just finished creating the movie that will make an impact in the film industry but don’t know how to accrue more viewership; what do you do? Oh, look–Reddit! Yes, Dallas has a subreddit for filmmakers to share events and films that subscribers to the thread can support, critique or possibly join in the movie-making process.

Whether it’s materials, skills, or extras that you need, this thread can help find it. You don’t need to leave the city to produce a masterpiece; all the tools can be found within the city. People all around Dallas are happy to assist anyone with a vision.

No, not motorcyclists. Bikers. Because it is a large and sparse city, Dallas isn’t very biker-friendly–as one can tell by the vast absence of biking lanes. That’s not to say, however, that the biking community isn’t active here. The long trail parks Dallas has makes up for the city’s preference to trucks and cars, meaning you still have many choices in deciding where to ride.

The community’s subreddit takes advantage of these options and uses them to alter Dallas’s business-centered atmosphere into natural biking trails. The thread is cooperative and is open to group ridings, biking events, and suggestions on where to find the best tune-up or sales. Great way to find new places to ride in the city. Just be careful and take this user’s tip as guidance to Dallas biking.

Ever wanted to explore the world of exotic cuisines but don’t know where to go? The Dallas food subreddit is there to supply cravings you didn’t even know you had.

Whether it’s a special burrito you want or a specific kind of queso, you are free to talk about those desires within you without any sort of judgment. Dallas is full of obscure restaurants waiting for you to discover so make sure to follow this thread and find new options to try for your meal. Sorry, meals.

Ever wanted to explore the world of exotic cuisines but don’t know where to go? The Dallas food subreddit is there to supply cravings you didn’t even know you had.

Whether it’s a special burrito you want or a specific kind of queso, you are free to talk about those desires within you without any sort of judgment. Dallas is full of obscure restaurants waiting for you to discover so make sure to follow this thread and find new options to try for your meal. Sorry, meals.

Bud Light may be one of the most consumed beers in Texas but that’s not to say it has the best taste–at least, according to the Dallas’s beer subreddit. Requests for certain stouts, ales, and lagers and where to find them are the common topics, making it easier for Dallasites to trade craft beers from one another.

In the quest to find the right beer, ask around the thread and maybe you’ll find someone who has what you want or get a good recommendation on where to find it. Follow this thread to learn where the best alternatives to common beers are. Dallas can do better than Bud Light. 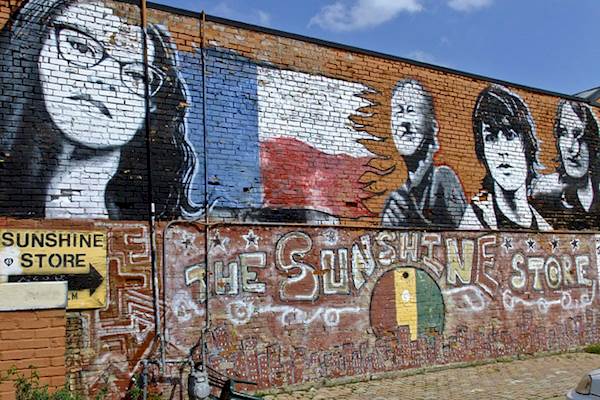 If you’ve ever walked around Deep Ellum, you know how much art that part of town is covered with. Notwithstanding the many museums Dallas is home to, art can’t seem to stay within walls. It is a sign of cultural progression that both public and street art are welcomed in the city, because it shows the value people hold in design and creativity–two driving forces that make up Dallas.

Whether it’s a sketch or a tattoo, start a thread on this subreddit and share the art you’ve seen around the city. Or post a link to an upcoming art festival; that’s cool, too.

It’s always great seeing people working together within a scene or a community or group and supporting each other by attending local events they host. The Dallas music subreddit does just that by promoting concerts local bands will be performing in, welcoming all of Dallas to join and expand upon the scene.

If you wanna get to know what this city has to offer in music, just ask like this user did. It shows how much people are willing to help city life thrive with the power of a song. Show how great Dallas music is by following this thread and support local bands.