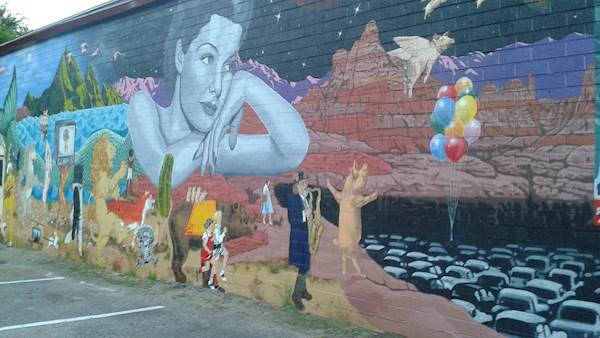 Sure, Dallas is the Big D in DFW, but some of us love the Little D — Denton, that is.

The cool little ‘burb is the north point of the “golden triangle” of Dallas, Fort Worth and Denton. Population wise — with only 121,000 people — it’s not even in the top 10 cities of the metroplex. But when it comes to culture, we give this college town an A.

Here are some reasons you might want to move to (or visit) Denton!

First, there’s live music. You’ll find rock, classic, and alternative — lots of indie music of all kinds — in Denton. Something’s always playing at Dan’s Silverleaf, Abbey Underground, and the clubs around Fry street or the square. There’s even country music at Rockin’ Rodeo if that’s your style.

With two colleges in town, there’s great classical music as well. And don’t forget the world-famous One O’Clock Lab Band and other jazz ensembles from UNT.

Without such a great town, we'd never be able to put on such a great show for y'all! Thanks City of #Denton! #dentonjazzfest #dentoning #jazz #jazzmusic @bravecombo #music #musicfest #dfw

It’s mostly the music that makes the festivals great in Denton, but there’s more to it than just tunes. Next year marks the 37th year for the Denton Arts and Jazz Festival, the Little D’s big annual event. Cinco de Mayo’s always a big deal, too, and the city also hosts Dog Days of Summer, an Arts, Autos, and Antiques Extravaganza, and seasonal concert lineups of music on the square. Oaktopia Fest is new to the city festival lineup, but gaining steam quickly. Denton’s also the long-time home of the North Texas State Fair and Rodeo.

It's smiling at me! The Om Shanti bowl at @thebowllery #vegan #dentonvegan

What we mean by crunchy is that cute term that gets applied to natural, healthy, and eco-friendly lifestyles. There’s plenty of that in Denton from yoga classes on the square to running clubs that meet up around town. It’s a pretty bike-friendly place and campus areas are nice walkable neighborhoods. If you’re looking for vegetarian and vegan-friendly options, Denton’s a very accommodating town. And whether you’re shopping to cook at home or having a snack at the cafe at The Cupboard, you’ll find lots of organic and gluten free options around. Eating out is easy too at places like The Bowllery and The Pickled Carrot food truck!

And Yeah, the Food’s Good, Too

So there’s lots of fresh, healthy food here, and options for everybody. That doesn’t mean there isn’t fun food, too. From Hypnotic Donuts or Loco Cafe for breakfast to Texas Tapas for snacks or Rooster’s Roadhouse for barbecue, Denton has it all. Desserts at Crickles and Co. is one of a dozen or so places that are 100% worth driving to Denton for. But why drive there when you can live there?

Not to Mention the Beer

grabbed a mixed sixer with my guy from @beardedmonk! loving that Hop Brownie, @meldots! 🍻❤️

So Denton has its own brewery and bunches of bars with craft beers. So whether you’re hanging out at Audacity Brewhouse or getting a growler fill at Lone Star Taps and Caps or picking up a six pack at Metzlers, we think you’re gonna like the beer scene here.

You Can Get Smart

Students and faculty at Texas Women’s University and University of North Texas help make this town smart and fun. From “Mean Green” football to incredible arts and lecture series programs, there’s always something interesting going on, and most of it’s open to the general public. If nothing else, a drive by the UNT campus is in order just to see the amazing architecture of the Apogee Stadium and Murchison Performing Arts Center flanking the highway.

Outdoor life is great all over DFW since we have such wonderful weather. Sure it gets hot in the summer, but Denton is full of places to get outdoors year round. With more than 20 parks including a water works park, a rail trail, a skate park, and a dog park, you’ll find something that lets you stay fit and fabulous outdoors four seasons a year.

But Let’s Keep it Weird

So Denton isn’t quite keeping it weird at the level of, say, Austin, but their city slogan, “North of Ordinary” is not for nothing. Some places like Atomic Candy and Recycled Books are just downright retro. Others places like Mable Peabody’s and Kush are decidedly modern, with a little alternative edge built in.

That mural (pictured at top of story) at The Juicy Pig captures just a little bit of the rich history and flavor of modern-day Denton. Of course, there are still a few things no one can really explain — like The Chairy Orchard. It’s different, it’s fun, it’s out there — but if you’re from Denton, there’s no need to explain.