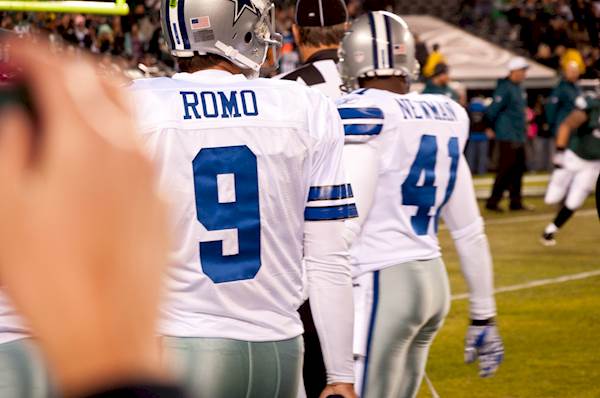 He’s been golfing since he was a kid

#Cowboys Tony Romo says 2 back operations have forced him to give up golf: http://t.co/5jQWssdAf5 pic.twitter.com/7uS9ToHJar /via @GolfChannel

It is interesting to learn that Tony Romo first got a golf club set at a tender age of 8. Romo progressed to tee up a golf ball in a vacant lot that was neighboring his parents’ residents. He happened to hit a 70-yard shot that landed in the front of their neighbors’ living room.

Romo has made three Pro-Bowls

You just wish u could play this game forever. Greatest game there is. #firstdayofpads pic.twitter.com/GCQ6nOXvKi

During the 2003 draft, thirteen quarterbacks were selected. Only one of them — Carson Palmer, selected No. 1 overall by the Bengals — ever made a Pro Bowl. Romo, who was undrafted, has made three.

He enjoys family vacations with the in-laws

Romo has said in interviews that the main reason he loves his wife is because of their similarities. He says their both homebodies who like family, and they enjoy family vacations with their parents and children.

He was on that DirecTV commercial

I wanna thank @DIRECTV for allowing me to show off my true self. ;) embarrassing is an understatement pic.twitter.com/F0NniFESlL

In 2002, Romo clinched victory at Eastern Illinois where he won the Walter Payton Award, given annual to the top Division I-AA football player. In 2001, the Panthers were led by him to the Ohio Valley Conference Championship.

He was meant to be picked

Romo attended the 2003 NFL combine but went undrafted. Sean Payton, then an assistant with the Cowboys, assured Romo that Dallas was interested. He was signed as an undrafted rookie free agent by the Cowboys.

Romo, seen above as a member of the Racine County All-County youngsters basketball squad. He also participated in varsity basketball, tennis and golf. Romo was the first Burlington athlete to receive all-state recognition in three sports.

Romo and Tom Brady have some similiarities

“See you in February.”

Just like Romo, New England’s Tom Brady did not draw attention as a quarterback at draft time. They both acquired their career break in a similar fashion through their placement of Drew Bledsoe.

His very first pass was 308 yards

1996 was the start of Romo’s junior year at BHS. He served as third-string quarterback of the varsity. After Romo was pit against Elkhorn by Steve Gerber (the then coach of Burington), Romo passed for 308 yards. Surprisingly, he had never played a structured football game in his life.

He’s a Hall of Famer

Romo got an induction into Eastern Illinois’ Hall of Fame on October 17, 2009. He went on record as the first player to have his number seventeen superannuated by the school. In addition, he received the key to the city from Charleston Mayor John Inyart, pictured on the right.

He helped vanquish the Bulls

Romo turned out to be the solitary second player in Monday Night Football history to toss five interceptions in a game that was heading to a win while the Cowboys headed to conquer Buffalo.

Can’t forget about Jessica, but did you know about Carrie?

Tony Romo has given up both golf and Jessica Simpson since his two back surgeries… pic.twitter.com/UOKmTVjS3n

Tony Romo once dated pop-star Jessica Simpson. However, this relationship only lasted for two years. They broke up hours before his 29th birthday. He also dated Carrie Underwood.

In the Navy (well, not Tony)

His father is a Navy man and was based at San Diego U.S during the time of Romo’s birth but they later moved to Wisconsin. After relocating, his father became a carpenter while his mother worked as a clerk of a grocery store.

Stimulus checks coming soon: Calculate how much you should receive

What will the post-coronavirus world be like? Many recall the days after 9/11

CarMax to furlough more than 15,000 associates

Micah may be gone, but his presence remains for Frogs’ 4th straight CWS trip