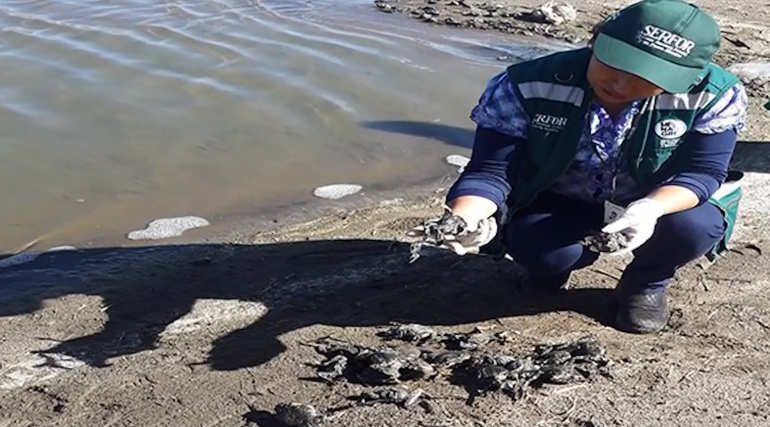 The Titicaca Water Frog is considered a “critically endangered” species, according to conservation groups. The giant amphibians, which can weigh more than two pounds, have excessive skin folds that have earned the species a rather wrinkly nickname: scrotum frog.

Over the past two decades, authorities say the giant frogs have become threatened due to over-harvesting for human consumption, exotic trout that feed on its tadpoles, and the destruction of their natural habitat.

While no one knows exactly why they’re dying now, those threats have dramatically decreased their population, authorities said.

Maruja Inquilla Sucasaca, who represents the Committee to Combat Pollution of the Coata River, reported the deaths to the Peruvian National Forest and Wildlife Service. The Coata River passes through Puno, a lakefront city in southeast Peru, and ends at Lake Titicaca’s Chucuito Bay.

During one environmental investigation, authorities witnessed seagulls feeding off dead frogs. Peruvian wildlife officials believe more than 10,000 frogs have died over an area that stretches 30 miles from the Cacachi bridge past the town of Juliaca to the mouth of Lake Titicaca.

Authorities recently have spotted sludge and solid waste during another investigation. According to La Republica, a Peruvian newspaper, residents living near the Coata River Basis held a demonstration in which they brought 100 deads frogs to the attention of environmental authorities.

Those residents believe sewage runoff coming from Juliaca has played a role in the frog deaths, the paper said.

Peruvian authorities have obtained samples of the water. Soon they intend to work with Denver Zoo specialists Roberto Elias and Enrique Ramos to determine the cause of death and to potentially launch further investigations.

State of Texas: Texans push back against President Biden’s agenda