WASHINGTON — A woman who says the Virginia Lottery owes her $20,000 after she hit it big with a scratch-off ticket may instead 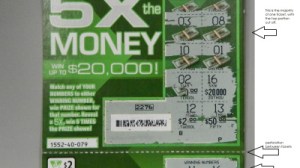 On Aug. 22, Ardella Newman claimed a $2 ticket matched the number 16, making it a winner. However, lottery officials said there was a mistake. Newman pressed, saying she won and filing a complaint with the Virginia Lottery.

“I want the money that I thought I won. If you look at the ticket, it says I won this money. It wasn’t anything that I did wrong. It’s what they did wrong,” she told WJLA.

Lottery officials released the findings Wednesday of Newman’s case. They said there were two different issues with that ticket and a previous one Newman attempted to cash. In the case of the $20,000 winning ticket, she’d tried to pass off two different tickets as a winner:

The case in question involved a game that Ms. Newman believed entitled her to a $20,000 prize. The investigation has concluded that Ms. Newman was actually trying to cash two separate tickets, the lower portion of one ticket and the top portion of another ticket. Based on the ticket codes we obtained from our ticket vendor, we have determined that the top ticket was not a winner, but the small piece of the bottom ticket would have been a $4.00 winning ticket if Ms. Newman had the entire ticket.

The lottery came to three conclusions:

Another case involving Newman went unreported before Wednesday. In that case, she claimed she’d won $52. Investigators determined she’d taped together portions of two different tickets in order to pass them off as a winning entry. The lottery said Newman admitted to it.