ARLINGTON, Texas — It’s the two words that let you know your season is in big trouble: Quarterback Controversy. Yeah, after the Cowboys offense was completely shut down by the Patriots, fans want the bench for Weeden!

“I want to see Matt Cassel start at quarterback. I think he’s got a little more experience over Brandon Weeden,” one fan told NewsFix.

“We need to get Cassel in there as the quarterback. Give him a shot. Weeden is not the guy,” said another.

Still others had more innovative ideas,“Well, I wish they’d put pads on Garrett, put him back out there! I think he’d be alright!”

Hey, Coach Garrett still has a cannon for an arm, but we’re not sure the 49-year-old former backup could take the hits.

But the focus is definitely on Matt Cassel, the QB Dallas traded for after Romo’s injury. Cassel does have a much better resume than Brandon Weeden, who has now lost his last 11 starts. 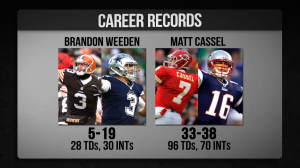 Weeden didn’t want to talk about the possible controversy after Sunday’s loss, “Those are their decisions. That’s what their role is. My role is to play football and be ready, so I’m going to prepare like I always do.”

As for the Cowboys, well, they’re in a wait and see mode with their Bye Week coming up.

That may all be true, but you better believe all anyone will care about is who is taking snaps when the Cowboys break the huddle against the Giants.

Hey, nobody is gonna fill Romo’s shoes, but luckily for whoever takes the reins in two weeks, they should have Dez Bryant back.

Hopefully, that’ll be enough, or else by the time Romo gets back, there might not be much of a goal left.

AUSTIN (Nexstar) — The Texas Railroad Commission, the agency in charge of regulating the state's oil and gas industry, is weighing in on how the incoming Biden administration could impact those industries here in Texas.

President-elect Joe Biden has said he would like to move away from the oil and gas industry.

AUSTIN (Nexstar) — Engineers at the University of Texas at Austin have created a self-watering soil that they're hoping could transform the ag industry by letting farmers grow crops with less water.

The team developed a way to pull water from the air and distribute it to plants using certain materials inserted into the soil, Professor Guihua Yu explained.

(NEXSTAR) – In households where Christmas is observed, there are three types of parents: those who have successfully avoided the Elf on the Shelf tradition, those who love it and those who are just doing their best not to forget that elf needs to move EVERY night in December.

With the pandemic raising potential health concerns around a strange magical creature coming to visit, the last two groups of parents are already beginning to take action before the elf's typical arrival. It seems both those who love the creatures and those who don't have largely landed in the same place. That elf needs to be locked up.