DALLAS — The Supremes made history Friday. In a 5-4 ruling, same-sex marriage is now legal in all 50 states.

“The four words etched onto the front of the Supreme court, “Equal justice under law,” applies to us, too,” said James Obergefell, who filed a lawsuit in Ohio.

“The ruling will strengthen all of our communities by offering to all loving same-sex couples the dignity of marriage across this great land,” President Obama said after the ruling was handed down.

Governor Greg Abbott tweeted: “SCOTUS has become an unelected nine-member legislature. I will continue to defend the religious liberties of TX.”

SCOTUS has become an unelected nine member legislature. I will continue to defend the religious liberties of TX http://t.co/CEJf8xyMKM

But here in North Texas, more than 100 folks headed to the Dallas County Courthouse to get a marriage license and to get hitched.

One couple rushed so quickly to the courthouse, they had makeshift rings for their nuptials.

“You know how they call getting married ‘tying the knot,’ we made these in the car before we came in,” Kristy Johnson said.

The 72-hour waiting period was waived. Nearly 20 judges were standing by to say words some thought they would never hear, “You may seal your commitment with a kiss!”

“It’s so emotional,” said Chris Walters, who got married Friday. “It’s monumental and historic and it’s fantastic. It’s the best day ever!”

‘It’s important for us to get married in Texas because this is our home state,” Kenneth Denson said. “We were both born and raised here.”

But in Collin and Denton County, couples were turned away. 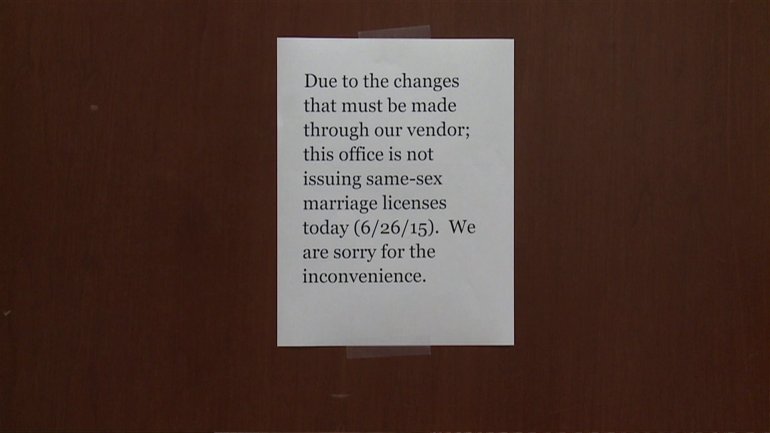 “I would recommend that all County Clerks and Justices of the Peace wait for direction and clarity from this office about the meaning of the Court’s opinion and the rights of Texans under the law.”

Meanwhile on this historic day, many of these couples aren’t thinking about political pundits but the new union they share.