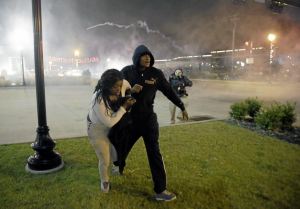 On August 9, 2014, Brown, an unarmed black 18-year old, was shot and killed by Wilson, who is white, along a street in a Ferguson, MO apartment complex. The shooting led to demonstrations, confrontations with police, and some looting and violence.

Wilson reportedly engaged with Brown and another teen in the Canfield Green apartment complex when he saw them walking in the street. He has said that Brown had pinned him in his vehicle and engaged in a struggle over the officer’s gun. Multiple published reports say Wilson told investigators that he had feared for his life.

Officer Wilson has not been seen since the shooting. Protestors have demanded his arrest, but he has remained free pending the findings of the grand jury. That grand jury has been hearing evidence in the case since late August to decide if there wass probable cause to charge Officer Wilson with a crime ranging from manslaughter to first-degree murder.

Since the shooting, Brown supporters have demanded that Prosecutor McCulloch be removed from the case, claiming he could not fairly prosecute due to bias. McCulloch’s father was a police officer killed in the line of duty in 1964 by an African-American man.

Protestors went so far as attempting a shutdown of Interstate 70 to get their demands heard.

“We want the officer held accountable and I think that’s the bottom line,” one protestor told FOX 2 at the time.  “Until that happens, we’re going to keep protesting.”

McCulloch has repeatedly stated that he will not step away from the case.

He told FOX 2’s George Sells back in September, “I think what’s perfectly clear is the people of this county have put their trust in me for a long time.  And if they didn’t have that trust, if they didn’t think I could and would present things in a fair and impartial manner, they wouldn’t keep reelecting me.”

Several reports of evidence presented to the grand jury were leaked to the media, disappointing the United States Justice Department.

Attorney General Eric Holder told CNN “This notion of leaking out selective information, which started as early as the release from the tape of that candy store, the convenience store, and then these leaks about what happened in the car, these are all the kinds of things I think are inappropriate. I said I’m exasperated, it’s a nice way of saying I’m mad. Whoever the sources of the leaks are, they need to shut up.”

The Justice Department is conducting its own investigation to see if federal civil-rights laws were violated by Officer Wilson.

Straight men cuddle and kiss with their best friends