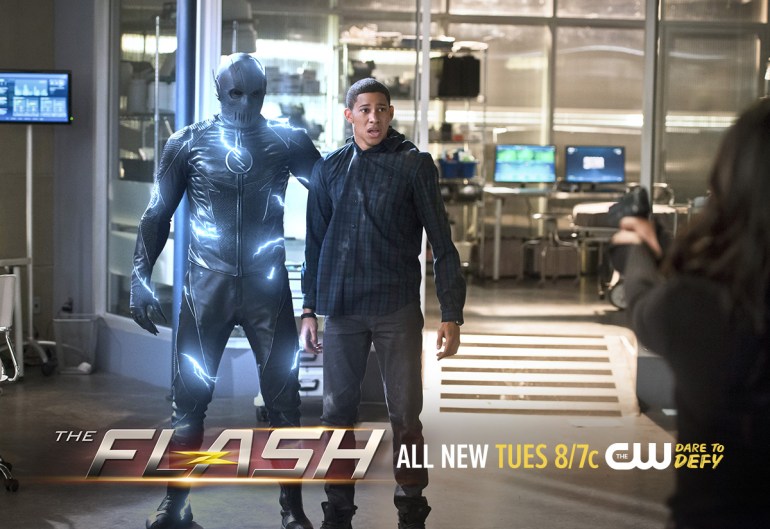 When it was revealed on The Flash that Zoom was, in fact, Jay Garrick (Teddy Sears), those tuning in were shocked that the man they grew to love over a season — or at least a version of him — was behind all of the destruction and devastation Team Flash has been facing. As surprised as they were though, their reactions paled in comparison to Sears himself.

The actor spoke with Zap2it about making the change from Jay to Zoom, when he found out he was the villain of the story, and why he wishes he wasn’t.

Zap2it: When it was revealed in Season 1 that Harrison Wells was Reverse Flash, Tom Cavanagh was very open about that turn being one of the major reasons he signed on to do the show in the first place. When did you find out this was the route for Jay?

Teddy Sears: [Laughs] Like Tom Cavanagh, I found out before I accepted the job. I got on a call with Andrew Kreisberg and company and he told me this was the plan for the season, and it all sounds very exciting. Many months into shooting there had been no word from the writers and no indications in the script.

RELATED: ‘The Flash’: Barry travels back in time and screws with the timeline again

Without having seen Season 1, I had no idea this had happened before. Knowing that, I became very attached to playing Jay Garrick. Many months into shooting there had been no words from the writers or any indication in the scripts that I was going to morph into this other character, as it was originally intended.

So I began to convince myself that it wasn’t going to happen, which was great. I was sort of hoping against hope because I really did love playing Jay. I loved everything about him — the history, the origin, the type of guy he was.

But in the episode where Caitlin and I are in the park and I point out my doppelganger Hunter Zolomon, I knew this was, in fact, the path we were going to go down.

It was a difficult thing to do because I’m an honesty-first guy, through and through. But in the TV world where big reveals are the reasons we tune in and stay tuned in, I had to sidestep that initially. Also, I really hoped it wasn’t going to happen and was being shown all of these reasons why it wasn’t until it was.

Looking at the moment it did happen, as an actor what is it like getting to play these two extremely different characters in one role?

It was thrilling! My God … I haven’t said this anywhere in print, but to anyone who will listen, it’s been the most satisfying, enriching, exciting job of my career. The ability to play these wildly divergent characters — and when we get into this new episode, we’re going to get into the origins of Zoom. We’re going to look at Hunter Zolomon’s origin story, really.

As we’ve seen from trailer and photos from that new episode, it’s the first time the team is coming face-to-face with an unmasked Zoom. What is that meeting like, after how entrenched in the team Jay was?

I sort of look at it two ways. One, as an actor, suddenly I was no longer on the same team as all these other actors who had become my friends and allies. Now I was across the room from them, which was awkward, wearing a different suit and brandishing a different attitude. That first day of shooting was a little bit less comfortable than it had been, but in good fun of course.

Then as the character, it’s sort of wonderful because Jay had almost lulled them to sleep in a way that they would never expect this mild-mannered, upstanding guy who was on their team could possibly be anyone but who he says he is.

So that was really fun. Zoom is this sociopathic, obsessive — this term comes to mind — megalomaniac, who I think truly, unlike Teddy Sears the actor, was in his element sitting across from his former friends with a feeling of deep self-satisfaction that he was able to pull off this ruse.

That was really fun to relish as an actor, to occupy that head space.

Morning After takes a look at some funny live TV bloopers in our very first edition of Morning After REACTS! Who better to comment on the misfortunes of live television than our very own Ron Corning, Jenny Anchondo and Yolonda Williams!

COLUMBUS, Ohio (WCMH) - Joe Kovacs is the reigning Olympic silver medalist in the shot put. He's also a favorite for another medal in Tokyo.

From the weight room to the throwing circle to the kitchen, it's hard to find Joe without his wife, Ashley too far away.

(ABC4) -- The COVID-19 pandemic has, in the words of Greg Skordas, a lawyer in Salt Lake City, "created all kinds of special circumstances and special exceptions to the rules that we've always considered in employer and employee relationships."