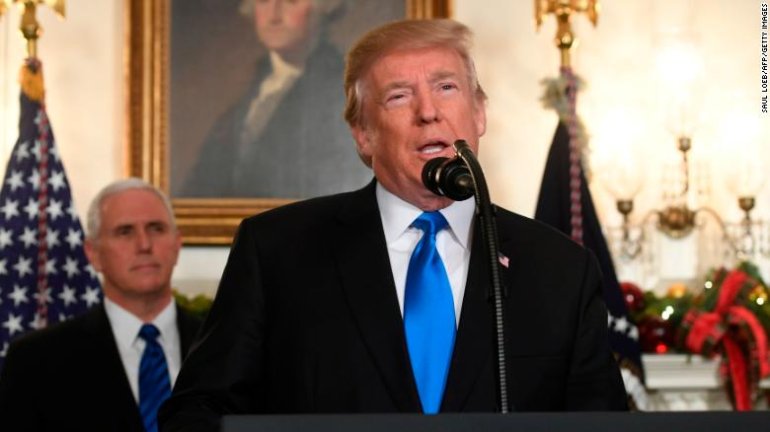 Donald Trump became the first US president to speak at the World Economic Forum in Davos and bragged, like he often has, about the state of the American economy. It won’t save his presidency.

Something that Trump fans, and even #NeverTrumpers (like New York Times columnist Bret Stephens) don’t seem to understand: it’s no longer just “the economy, stupid.” Why? Because Donald Trump and his most ardent supporters spent the Obama era setting a new precedent: that good economic news is to be ignored, downplayed or disbelieved — or at least never credited to the guy in the White House.

They did this during the presidency of the first black man to hold that office — a man who had helped to steer the US economy from the brink of collapse into the longest monthly job creation streak in the country’s history.

That Trump supporters then turned around and were able to elect a man who rose to national political prominence while using open bigotry shows that the new standard was now in place: voters will give as much credit for a good economy in November, 2018, or in 2020 as Trump fans gave President Obama.

While Trump has talked up economic performance during his first year, it was simply a repeat of what we saw during the final Obama years: solid quarters of growth bracketed by slower growth; monthly job increases and historically low jobless claims; and high levels of inequality. In 2017, the economy grew 2.3% — in line with its performance under Obama. But under Obama, the poor and middle class had their biggest annual wage increase ever, and more Americans had health insurance than ever.

That’s why, come the fall midterms, it won’t matter to voters — and particularly voters of color — whether the economy has had more quarters of plus-3% growth (which happened multiple times under Obama), has officially reached full employment, or has seen a significant increase in wages.

Trump has conditioned us to disbelieve economic indicators, as did some of his high-profile supporters, who claimed the jobless rate was dropping under Obama because the books had been cooked. They did not care that the S&P 500 nearly tripled during the Obama years, even as they now tout every new record high under Trump. They did not care that the unemployment rate dropped from 10% early in Obama’s tenure to less than 5% by the time he left office. Neither did they care that the poor and middle class received the largest annual increase in wages on record in 2016.

They credit Trump’s deregulation talk and tax cuts, neither of which have fully kicked in, for recent economic growth, but ignored the millions of jobs created by the Obama stimulus or two even larger tax cuts under the previous President.

They don’t even care that Trump broke multiple promises to those in his base, including those Carrier jobs he supposedly saved in Indiana that weren’t saved. His administration is current dismantling a consumer protection bureau that helped level the playing field between corporations and the poor and middle class. While various corporations have announced bonuses and modest raises because of the tax cut that is now trickling its way through the economy, they have still been announcing massive layoffs.

For example, Walmart trumpeted wage increases then hours later quietly announced store closings that would cost thousands of jobs. And inequality is at an all-time-high.

It’s also no longer the economy, stupid, because voters of color understand that there are bigger stakes at play, and that, truth be told, the economy ebbs and flows for reasons not even the most learned economist fully understands.

Voters of color won’t make the mistake 58% of white voters made in November 2016, excusing open bigotry and racism in hopes that other things might be good for the bottom line.

The difference is that voters of color won’t pretend there is no good economic news. They know there is. They’ve been acknowledging it since the final few Obama years. They want good jobs and better pay just as much as anyone else. They also know they don’t have to sacrifice their dignity and principles to prop up a man unworthy of their support.