“I’m here today to restate the lawful, constitutional authority of a governor to use his or her veto authority. And I would do it again. I stand by that veto,” Gov. Perry said outside the Austin courtroom, packed with reporters.

If you’re late to the game, here’s what allegedly went down. 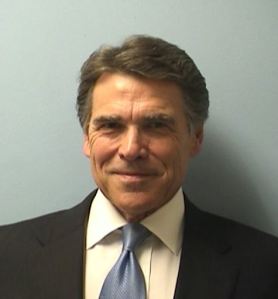 The head of the state’s public integrity unit, Rosemary Lehmberg, was convicted of driving drunk. Perry was indicted for threatening to veto million sin state funds unless Lehmberg stepped down.

Lehmberg, a democrat, refused to resign.

So Perry, a republican, made good on his threat and vetoed the money. Now he’s in hot water.

The last time Perry was at this courthouse was when he got his smug mugshot.

This time, he really had something to smile about, and we’re not talking about the hearing.

Today is the governor’s wedding anniversary. He event tweeted a #TBT (Throwback Thursday) picture of him kissing his wife, Anita. The caption read — “32 years ago today I married by best friend and the love of my life.”

32 years ago today I married my best friend and the love of my life, @firstladyperry. #tbt #luckiestmanintheworld pic.twitter.com/EmjZ3suQqp

Alright, back to the court stuff. If convicted, Perry could face the rest of his life in prison.

SAN ANGELO, Texas (KLST/NEXSTAR) -- Many have asked whether you can get COVID-19 in between vaccine doses. The answer is yes.

That's what happened to Nelda Benavidez, a grandmother who contracted the coronavirus after her first dose of the Pfizer vaccine on Jan. 7.

Abbot spoke at a fire station in Corpus Christi to detail the initiative, dubbed "Save Our Seniors." The National Guard will assist communities to get local seniors the proper COVID-19 shots. Abbott said some of the members will help identify and register seniors who need to be vaccinated, and others will go to homes and administer them.

Abbott was speaking in Corpus Christi while highlighting the state's COVID-19 vaccine rollout, but took questions about ERCOT as state lawmakers started hearings Thursday to investigate the reasons for the Texas blackouts.