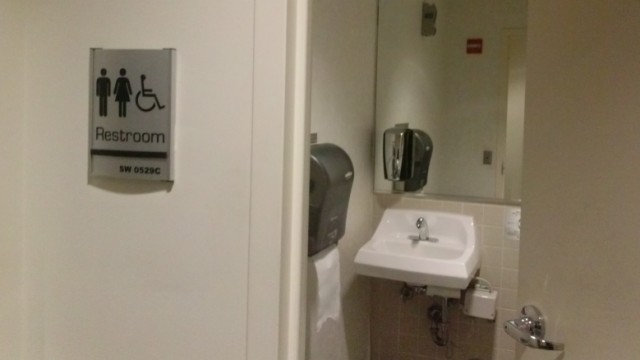 The new law went into effect over the weekend after voters approved the ordinance back in August.

“The City’s adoption of these new regulations are the result of a national campaign by the National Lesbian, Gay, Bisexual, Transgender, and Queer/Questioning (LGBTQ) organization to bring attention to gendered restroom facilities which can present uncomfortable and dangerous situations for the gender non-conforming community,” the City said in a statement.

This law does not apply to businesses with multi-stall restrooms.

Austin defines a single-user bathroom “as a restroom in which the primary entry door into the restroom is lockable and is available for use by an individual with or without assistance.

Washington DC, West Hollywood and Philadelphia have a similar regulations.

Proud to of my hometown today: "All Single-Use Bathrooms In Austin, Texas Are Now Gender-Neutral" http://t.co/Zvkht7yTss

Gender neutral bathrooms are a thing in Austin now!! I'm so happy.

I'm GLAD this has come to Austin. – http://t.co/I04bkAQjSw Austin has joined Philadelphia and Washington D.C. in adopting regulations r…

AUSTIN, Texas (AP) — A Texas sheriff has been indicted on charges accusing him of destroying or concealing video in an investigation into the death in custody of a Black man, Javier Ambler, that was filmed by a police reality TV series “Live PD.” Williamson County Sheriff Robert Chody was booked into his jail Monday on a $10,000 bond and released a short time later. Williamson County prosecutors have been investigating possible evidence tampering following Ambler’s death in March 2019. Williamson County sheriff’s deputies repeatedly used stun guns on the 40-year-old man, despite his pleas that he was sick and couldn’t breathe.

LAKE JACKSON, Texas (AP) — Environmental officials in Texas have lifted a warning for a final Houston-area community to stop using tap water because it might be tainted with a deadly brain-eating microbe, but with a warning that the water should be boiled before being consumed.

Earlier this month, 6-year-old Josh McIntyre died after contracting the microbe, naegleria fowleri. The Texas Commission on Environmental Quality late Saturday lifted the warning for Lake Jackson and replaced it with a notice to boil water for bathing and and cooking and advised residents to prevent water from getting into their nose.

The governor, along with Texas House Speaker Dennis Bonnen, made the announcement during a press conference held at the Dallas Police Association.

Tales From the Speakeasy: Who Is the Dallas Crime Family?