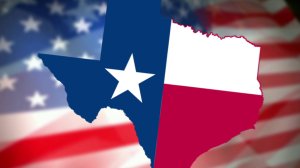 AUSTIN - In Texas, we have a reputation for doing what we want when we want. That "Don't Mess with Texas" attitude is starting to mess with exactly who decides what laws we like and what laws we don't.

Take same-sex marriage. On Wednesday, lawmakers heard arguments for the Preservation of Sovereignty and Marriage Act. That bill would bar state employees from spending a penny of state or local money on same-sex marriages.

No marriage licenses could be issued or recognized in any way, even if the U.S. Supreme Court votes to make same-sex marriage the law of the land. Whoa.

But the Land of Black Gold is also hellbent on doing what it wants when it comes to fracking.

Yep, on Tuesday a Senate Committee voted unanimously to approve what folks are calling the Denton Fracking Bill to limit local control over oil and gas activities in Texas.

So, what message does that send to folks in the Mean Green City who voted to ban fracking inside city limits back in November.

Uh, never mind. But hey, thanks for voting everybody.

The bill now heads to the Senate and basically could take away any power local cities have. Yep, don't mess with Texas.

AUSTIN, Texas (AP) — Texas Gov. Greg Abbott has taken another step in his phased reopening of statewide activities after the coronavirus lockdown.

In a proclamation Tuesday, Abbott is allowing the reopening of water parks and shopping mall food courts and the resumption of adult recreational sports and driver's education programs.

DALLAS (AP) — Texas health officials report 623 new cases of COVID-19 and say there have been another eight deaths linked to the disease caused by the coronavirus.

The Texas Department of State Health Services said Monday that there have been 55,971 confirmed cases and 1,527 fatalities linked to the virus.

AUSTIN (KXAN) — The McConaughey’s are on the road again, this time delivering 110,000 medical masks to hospitals across rural Texas.

The couple posted a picture on Twitter, and said thanks to Lincoln Motor Company for donating the masks.