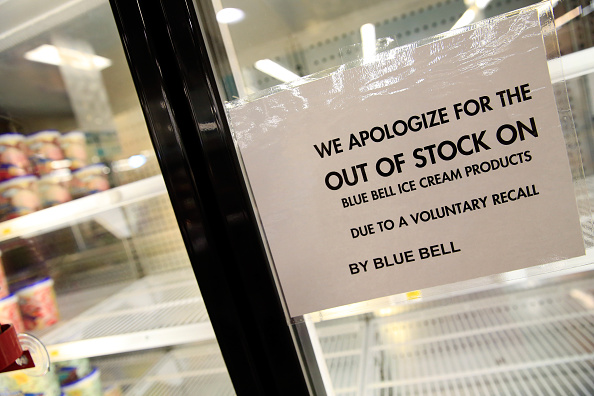 BRENHAM, TX – The listeria outbreak that prompted Blue Bell Creameries to recall their entire product line dates to 2010, according to the Centers for Disease Control.

After weeks of gradual recalls, the company recalled all its ice cream, frozen yogurt, sherbet and other frozen treats sold in 23 states because they could be contaminated with Listeria monocytogenes, the company said Monday. The bacteria can cause serious and sometimes fatal infections in young children, the elderly and others with weak immune systems.

The CDC recommends consumers do not eat any Blue Bell brand products.

Three people in Kansas have died in the past year and 10 people in four states have fallen ill from the bacteria believed to have come from Blue Bell products, the CDC said Tuesday. One person became sick in Arizona, five in Kansas, one in Oklahoma and three in Texas, the CDC said.

People first became sick in January 2010, the CDC said. The agency connected patients from 2010-2015 to the current outbreak through comparisons to a database of bacteria DNA.

The origin of the strain is still unknown, but “the fact that it was the same strain over the last five years suggests it could have lurked somewhere in the factory the whole time,” said Dr. Robert Tauxe, deputy director of the CDC Division of Foodborne, Waterborne and Environmental Diseases.

“There may be cases that never got diagnosed and we are looking at the patterns, the DNA patterns, to guide us to which cases might be related,” he said. “If tomorrow someone found another completely different pattern from (Blue Bell) ice cream products, we’d be looking to see if there were related cases to that as well.”

Tauxe said the listeria strains found in Texas are different than those found in Oklahoma.

“It looks to us like there was one group of closely related strains related to ice cream from one factory and another different group related to a different factory,” Tauxe said. “We don’t think something contaminated both factories.”

“This means Blue Bell has now had several positive tests for Listeria in different places and plants,” the company said in a written statement.

“At this point, we cannot say with certainty how Listeria was introduced to our facilities, and so we have taken this unprecedented step,” the company said.

Listeria monocytogenes can cause serious and sometimes fatal infections in young children, frail or elderly people and others with weakened immune systems, the Food and Drug Administration says.

In the United States, an estimated 1,600 people become seriously ill with listeria each year; about 16% of these cases result in death.

Although some people might suffer only short-term symptoms such as high fever, severe headache, nausea, abdominal pain and diarrhea, listeria can also cause miscarriages and stillbirths.

The governor, along with Texas House Speaker Dennis Bonnen, made the announcement during a press conference held at the Dallas Police Association.

AUSTIN (KXAN) --- Both Republicans and Democrats in Texas are pressing Gov. Greg Abbott for his plan to spend nearly $6 billion in remaining federal coronavirus funds, which must be used before the end of the year.

In March, Texas received $12.84 billion in federal coronavirus relief funds as part of the CARES Act. So far, the state has spent $7.14 billion with $5.7 billion remaining before the Dec. 30 deadline when those funds would be returned to the federal government, if not appropriated.

AUSTIN (KXAN) — The University of Texas is testing wastewater samples across the city of Austin to predict when cases of COVID-19 may be on the rise.

Professor Mary Jo Kirisits is leading a small team in the Cockrell School of Engineering that’s taking samples from two of Austin’s major wastewater treatment facilities and testing them for RNA that shows the virus.