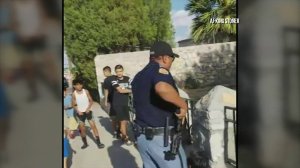 A police officer who was caught on video pointing a gun at a group of children in El Paso, Texas, is back at work after being unanimously exonerated by a disciplinary board.

El Paso Police Department spokesman Sgt. Enrique Carrillo said on Thursday that the 13-member Disciplinary Review Board, comprised of officers and civilians, found earlier this week that the officer pointed the gun at a specific juvenile and not at a group of children on July 5.

The officer, whose name has not been released, is a four-year veteran of the El Paso police. He had been placed on desk duty while the department investigated the incident involving a group of children in front of a community center, according to a new release from the city of El Paso.

Cell phone video posted to Facebook by user Aj-King Stoner shows the police officer holding a young man against a stone column while the group of children are shouting insults at the officer. That’s when the police officer pulls out a gun and points it for a moment before putting it back in his holster.

A second police officer helps drag the young man onto the road, where he is handcuffed. Meanwhile, the first officer tells the children around him to “get back.” The officer pulls out his baton and appears to push one of the children.

The city of El Paso said the officers were responding to a criminal trespass call in the area and "a series of events unfolded while the officers were handling the call and culminated with the situation that was captured on video and posted on social media sites." Two people were taken into custody, one minor and one adult, and charged with interfering with a police investigation.

The video has since being taken down from Facebook.

The officer who pulled out the gun told investigators he did not point the firearm at the group of children but at a specific individual he deemed a threat, CNN affiliate KVIA reported.

The officer returned to regular duty on Monday, the same day the disciplinary board reached its decision, officials said.