by JuliánAguilar and Darla Cameron, The Texas Tribune 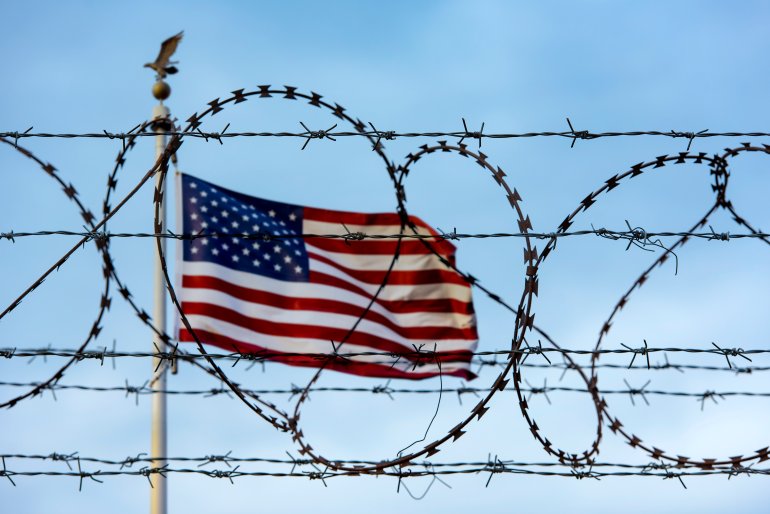 TEXAS – As the White House continues to expand deportations and push measures to curb illegal immigration, many Texas immigrants are forced to navigate the immigration system without the help of an attorney.

From October 2000 through February 2018, less than 30 percent — 213,197 of 733,125 — of immigrants in deportation proceedings in Texas had representation, according to the Transactional Records Access Clearinghouse at Syracuse University. That rate is one of the lowest in the country, behind only Arizona and Louisiana among the states with the most deportation cases.

Nearly 70 percent of the Texas cases during the time frame studied ended with a removal order. By comparison, 74 percent of defendants in New York had a lawyer, and just 27 percent received a deportation order.

Federal immigration courts in Texas have more deportation proceedings than any other state. Unlike in criminal court, immigrants facing deportation don’t have the right to a lawyer in civil cases. Among the 10 states that process 80 percent of the nation’s deportation cases, Texas has the third lowest percentage of immigrants who have lawyers. 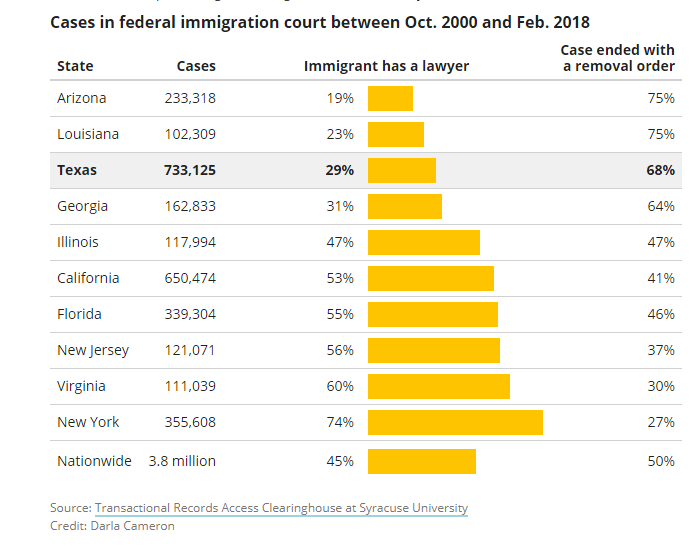 Because immigration violations are largely civil in nature, undocumented immigrants in deportation proceedings aren’t guaranteed the right to an attorney. That also includes immigrants who turned themselves in to authorities and are seeking asylum.

Immigrant advocates and attorneys say that a lack of representation multiplies a person’s chances of being deported, and they said that the Trump administration’s recent mandates are guaranteed to fast-track the removal of even more undocumented immigrants. Attorneys say that’s because most immigrants can’t afford an attorney, which leaves them to navigate through the complicated system on their own. They are also often transferred from one facility to another, depending on where the government deems there is the most available space in a detention center.

According to a 2016 TRAC study, more than 80 percent of unaccompanied minors who entered the country between 2012 and 2014 and didn’t have representation were deported.

“As bad as it is, doing all this ensures that it’s going to go up,” said Jackie Watson, an Austin-based immigration attorney.

The latest sweeping change from the Trump administration came Tuesday, when the Executive Office for Immigration Review, a branch of the U.S. Department of Justice, announced it would end the popular Legal Orientation Program. That program provides detained immigrants information about the immigration court system and helps them obtain pro bono services.

The program, administered by the Vera Institute of Justice, operates at detention centers across the country, including Texas. It’s being suspended so the federal government can conduct “efficiency reviews of its operations,” The Washington Post reported.

Watson said that even if the program didn’t provide every detainee an attorney, it made vital information available to a person who was on the verge of navigating the complex immigration system. It was also a vital training ground for attorneys whose sole practices became immigration law.

“Even if the person doesn’t ultimately get a pro bono attorney through these organizations, they at least now know how the process is going to work,” she said. “[The program] is how I got my start.”

Without the assistance, the onus will be put on immigration attorneys to take more cases for free — a daunting task.

Alicia Perez, a San Antonio-based attorney, said every attorney would like to do more pro bono work. But even a routine asylum case involves at least four hearings and hours of preparation before each one.

“If I spend all these hours working for free, then I can’t pay my bills,” Perez said. “Pro bono is a luxury and a lot of people can’t afford it.”

In Las Cruces, New Mexico, on Wednesday, Sessions said the goal was achievable.

“I have made it clear to these judges that we expect them to complete cases quickly and efficiently. Not to put them on hold — but to complete them,” he said to a gathering of border sheriffs, according to prepared remarks.  “This is not a radical goal, but a rational policy to ensure consistency, accountability, and efficiency to our immigration court system.”

Critics of the requirement said immigration decisions can’t be conducted on an assembly line and that fast-tracking decisions would lead to more appeals, which would actually lengthen the time it takes to resolve a case.

Also last week, Sessions announced a “zero-tolerance” policy for people who cross or attempt to cross the border illegally. The directive instructs all federal prosecutors on the southwest border to prosecute all Department of Homeland Security referrals for alleged violations of federal immigration illegal-entry laws.

That came the same day President Donald Trump ordered an end to what he’s criticized as “catch-and-release” policies, in which undocumented immigrants are released while they await proceedings in immigration court.

“It is time to empower Federal authorities by providing them with the legal authority and resources they need to effectively enforce our Nation’s immigration laws,” a White House memo on “catch-and-release” states. “Otherwise, the influx of illegal aliens into the United States will only continue.”

Jeremy McKinney, the secretary of the American Immigration Lawyers Association, said the combined moves would lead to more litigation, not less.

“The more people who are detained, the more resources have to be allocated to adjudicate those cases,” he said. “A majority of appellate courts in this country agree that prolonged detention presents constitutional concerns. Even now, it can take anywhere from 6-12 months to complete a detained case. This will get worse — creating more litigation.”

“It doesn’t make any sense to me, this is a really shitty strategic plan from the DOJ,” she said.