FORT WORTH -- Texas is used to hot weather, but if you think it's been a bit hotter a bit earlier than normal this year, you're right.

"Usually we do start warming up as we get close to the end of May, but we've actually had some temperatures that are near record values," says Matt Stalley, a meteorologist with the National Weather Service's Fort Worth station.  "Anytime you get close to those records you know you're looking at something that's a little uncommon for this time of year."

After two weeks of temperatures in the 90s, DFW is looking at possibly hitting 100 this week--possibly more than once.  If it happens before the calendar turns on Friday it will be the first time the area has hit 100 before June since 2006, and it would be only the 16th pre-June occurrence since official record-keeping began in 1899!

"We've hit 100 degrees as early as March before," notes Stalley, "so it's certainly not that exceptional for this year."  He says the average first date for hitting 100 in DFW is July 1.

Whether or not the official temperature reaches 100, the heat index--what it feels like outside--is predicted to top 100 through the weekend.  So stay hydrated, take breaks from being outside, and make extra sure to not leave kids or pets in your car!  Since 1998 an average of 37 children have died each year from car-related heatstroke, and more than half of those cases were reportedly caused by caregivers forgetting those kids were there.

"It just takes one thing to throw off your routine," cautions Stalley.  "Check the backseat whenever temperatures start to climb.  It only takes a few minutes to make your vehicle just completely unsurvivable in this kind of heat." 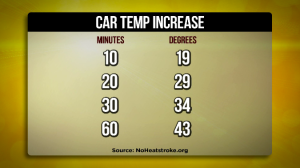 UTAH (ABC4) -- A strange discovery in a remote area of Utah has been captivating many over the last few days. The find is so odd that even the Utah Department of Public Safety made a tongue-in-cheek reference to its' otherworldly possibilities.

While assisting the Utah Division of Wildlife Resources in a count of bighorn sheep in southeastern Utah, the Utah Department of Public Safety Aero Bureau spotted a metal monolith in a remote area of red rock.

Health experts say outdoor dining tents are generally safer than dining inside, but caution that they’re not all equal.

Many restaurants are erecting individual tents, igloos and other outdoor structures that let people who are dining together avoid being indoors, where the coronavirus spreads more easily.

KAUFMAN, Texas (AP) — Two children were killed and four others were hurt this past weekend after their go-kart collided with an SUV on a North Texas county road, authorities said. Officials with the College Mount Fire Department in Kaufman County, along with the Texas Department of Public Safety and other agencies responded to the accident at about 12:30 p.m. on Saturday.

At the scene, authorities found that a go-kart with six children between the ages of seven and 12 had been hit by the SUV on the road in Kaufman County, located southeast of Dallas. One child died at the scene and another child later died at a hospital. Officials say no charges have been filed as their investigation continues.

Coronavirus pandemic blamed for rise in violent crimes across the U.S.

Looking for the new Xbox or PlayStation 5? These sites will alert you when they’re back in stock