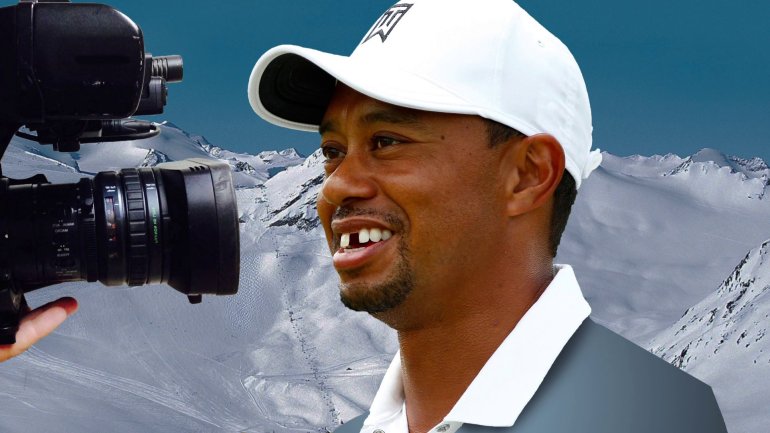 CORTINA D’AMPEZZO, ITALY — It looks like Michael Strahan has competition when it comes to who has the biggest gapped tooth smile. That’s because golf superstar Tiger Woods has a hole in his smile big enough to make the tooth fairy go bankrupt. It happened when

It happened when Tiger was watching his girlfriend, Lindsey Vonn become the most successful World-Class skier of all-time after picking up her 63rd win.

His agent claims that during a rush to the awards podium, a wayward camera hit Woods in the face and knocked out his front tooth. But one of the race organizers who was right next to Woods during that paparazzi crush says that never happened. We all know it`s not like

We all know it’s not like Tiger to cover something up, right? Come on, Tiger — let the tooth set you free.

Until then, it looks like Tiger’s scarf choice says it all. Hey, if you can’t have real teeth guess you can “fake it til you make it.”

Well, hopefully, when Tiger gets his tooth back, his game returns with it. Woods hasn’t won a Major since 2008. Now that’s something to say “ouch” about.

As cancellation of college football looms, some athletes say they’d feel safer at the university, others form union

Michigan defensive back Hunter Reynolds saw the tweets from Trevor Lawrence and other college football players, pushing for the opportunity to play this season, despite the pandemic.

Reynolds, one of the organizers behind a players' rights movement in the Big Ten, didn't like the way some on social media seemed to be pitting Lawrence's message against the efforts of #BigTenUnited and #WeAreUnited.

WICHITA FALLS (KFDX/KJTL) — Lone Star Conference officials announced Friday all competitions have been postponed until Spring 20201 due to the ongoing COVID-19 pandemic.

Correction: There was an error in the video in which Patterson's apology was misquoted. His correct apology posted to Twitter is included below.

FORT WORTH, Texas (KDAF) -- TCU's Head Football Coach Gary Patterson has been in the midst of controversy after he allegedly repeated a racial slur when speaking with the team about his no tolerance for the use of such words.

Amazon looking to use malls as distribution centers