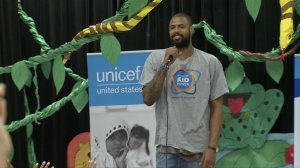 On Monday, Tyson stopped by Esperanza Medrano Elementary School for a different kind of shoot around.

“It’s important for kids to be active,” Chandler explained. “We’ve seen a decline in activity for kids throughout the generations.”

Tyson isn’t just a baller, he’s also a UNICEF Ambassador. You know – the organization that helps kids around the world?

Tyson, along with Mayor Mike Rawlings, launched UNICEF Kid Power, and they recruited help from some of the school’s students.

“It was really fun because we got to play a lot of games and it’s really cool because we get to shake their hands and take pictures with them,” program participant Angela Gomez said. 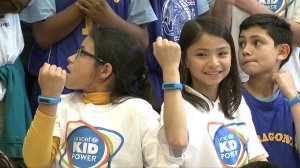 Here’s how UNICEF Kid Power works: the kids wear fit bands that monitor their steps; every 2,500 steps equals one point.

“For every five points the children receive, they feed a child in a third world country,” the school’s principal explained.

Talk about a winning concept; and speaking of winning – that’s exactly what the Mavs need to do as they wrap-up the regular season.

Sunday night’s loss the to the Indian Pacers was tough, and it didn’t help that Monta Ellis was out with an injury.

“[Ellis] has been such a vital part of our success this year, I don’t think one guy is going to necessarily be able to fill his shoes. I think it’s going to be a collective thing.” 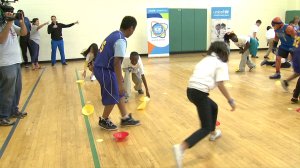 Hey, Tyson – looks like these pint-sized players got your back. Wonder how many UNICEF points they can rack-up for a game?

Gov. Abbott is allowing bars to reopen, but North Texas bars likely won’t be allowed to at first

We’re #1!: Dallas Cowboys fans found to be the biggest whiners