Okay, so maybe that question has actually never been asked, but one congregation in Decatur isn’t laughing because their road really is blocked by the oil company leasing access to their land.

“My maintenance man calls and says, ‘Pastor, they’re out here blocking the road,'” Allen Bates told NewsFix. “That’s the first that we knew that was gonna happen.”

In 2003, Pastor Bates and his Victory Family Church congregation moved into their new building on US 380 in Decatur. Around that same time, Ray Richey & Co, Inc. asked Bates if they could put an oil well on church property.

“We allowed them to do it, and we haven’t had any problems with it until now,” Bates said. 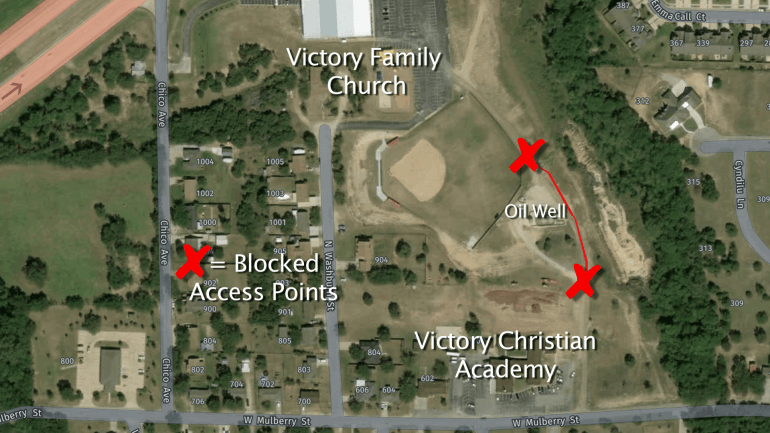 Now, they have a big problem. Barb wire fences, a locked gate, and no access from the church campus to their Victory Christian Academy school campus on the other side of the property have all caused some serious discontent.

It all started because they wanted to pave the dirt trail that’s connected the two buildings since the school opened five years ago.

“We’ve been driving up a muddy, dirt road for five years, and here we are fixing the road and making it nice, and all of the sudden they object to the road being here,” Bates said.

Texxol representative Zac Martin declined an interview, blaming the hate he’s already getting through phone calls and emails, but he gave us some insight into their decision to block the access road.

He said the paved road will mean higher speeds and more danger around the well that sits 70-80 feet from the dirt trail. He cited the possibility of a mother having a medical emergency, hitting the well, and causing an explosion.

Pastor Bates says one change would make that a non-issue.

“Scoot their fence to the other side of the road,” Bates said, gesturing his hand toward the well-side of the road. “They can build their fence up just as high as they’d like to build the fence, and secure it any way that they want to secure it. That would be totally fine with us.”

One reason Texxol gave for not moving the fence is that there’s a safety hook on the other side of the dirt trail. That hook, plus two others, would be used in an emergency if the well needed to be pulled. Texxol says anything outside that range is considered safe.

Bates claims he offered, on the church’s dime, to move the safety hooks to another location where the road doesn’t come into play. Texxol’s Martin said he was never presented that solution and offered that maybe the church should move their road outside the current hooks.

“They want us to build another road, which is going to be very difficult because of the height difference here,” Bates said. “We’d have to bring in loads and loads of dirt and resurface it to go around. There’s really no reason for it whatsoever.”

NewsFix also asked Texxol if they have a legal right to block access. Martin responded that it’s their public safety responsibility and that they’ve been accommodating for far too long on the issue.

If no one flinches, and it looks like no one will, it seems this one’s headed down the slippery slope to court.