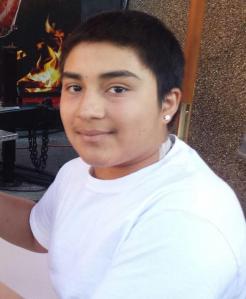 DUNCANVILLE, Tx. — Police in Duncanville are asking for the public’s help identifying those responsible for the shooting death of 15-year-old Ryan Lara, who was shot and killed Saturday during a possible attempted robbery. Police say officers were dispatched to Lara’s home in the 700 block of Wren Avenue around 11:20 pm Saturday, where Lara was found shot.

Witnesses say Lara was moving his parents’ vehicle from the street to the family’s driveway when shots were fired. Family members say when they came out of the house, they saw a car leaving the scene. The vehicle is described as a possible gray or silver four-door compact sedan. One family member fired a weapon at the suspect car, but it is not known if bullets hit the car or anyone inside it.

Lara was taken to Methodist Central Hospital, where he died as a result of his injuries. He was a Duncanville ISD student and was a cancer patient battling lymphoma.

North Texas Crimestoppers is offering a $5,000 reward for the arrest and indictment of those involved in the Ryan Lara homicide. Anyone with information in the case is asked to call Detective Jeff Pollock at 972-780-5000.