DALLAS -- With Election 2016 just over a year away, candidates have been announcing left and right. The latest, from right here in Dallas, is Nelson the Goldendoodle!

And now, he's hoping that fame will fetch him some votes.

"Well, I don't think a lot of dogs are running for President," Butler said.

Joining Nelson on the campaign trail is Walter the Wolfhound, who's pulling double duty.

Nelson didn't want to make any political promises, but we asked his campaign managers just what it is Nelson stands, we mean, sits for. He wants to get America back to the glory days for dogs -- free treats, fewer baths, etc.

Who could argue with that? And hey, he's got better hair than some of his competition. 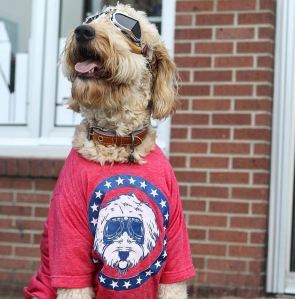 All this campaigning can be exhausting, but it is for a good cause.

"10% of all the shirt sales goes to the Texas SPCA," Butler explained. "So, it's our way of giving back to dogs in need."

You can support Nelson's campaign and help local animals by buying a shirt online.

In the meantime, these two puppy politicians are back on the road to the doggy White House.

LOS ANGELES (AP) — True to form, Betty White has something impish to say about her birthday Sunday.

“Since I am turning 99, I can stay up as late as I want without asking permission!” she told The Associated Press in an email.

WASHINGTON (AP) — The lead prosecutor for President Donald Trump's historic second impeachment began building his case for conviction at trial, asserting on Sunday that Trump's incitement of the mob that stormed the U.S. Capitol was “the most dangerous crime" ever committed by a president against the United States. A Senate trial could begin as soon as this week, just as Democrat Joe Biden is sworn in as the 46th president.

Rep. Jamie Raskin, D-Md., did not say when House Speaker Nancy Pelosi, D-Calif., will send the single article of impeachment against Trump — for “incitement of insurrection” — to the Senate, which will trigger the beginning of the trial. But Raskin said “it should be coming up soon” as Pelosi organizes the formal transfer.

Beetle keeps rivals off scent of food buried for offspring