President Donald Trump put his feud with the NFL on pause long enough to announce that he’ll be visiting Puerto Rico next week.

“I’m going to Puerto Rico on Tuesday,  it’s the earliest I can go,” the president said.

The  U.S. territory was also mentioned by Trump during a joint press conference with Spanish Prime Minister Mariano Rajoy.

“As we speak, FEMA – our great first responders and all available federal resources including the military, are being marshaled to  save lives, protect families and begin a long and a very difficult restoration process,” President Trump said.

The president has come under fire for bashing NFL players instead of focusing on more important things, like the devastation faced by Puerto Ricans.  Who are also American citizens.

Singer Marc Anthony, of Puerto Rican descent,  reminded the president of that via- Tiwtter on Monday, tweeting, “Mr. President shut the *f* up about NFL. Do something about our people in need in Puerto Rico. We are American citizens too.” 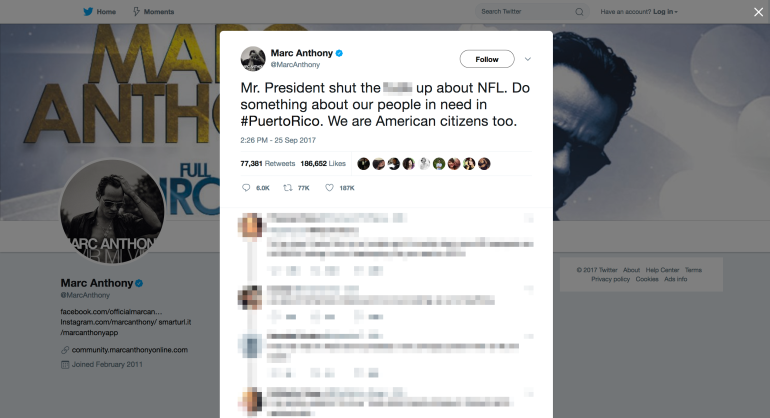 But Trump insists he has not been preoccupied and that the NFL issue is also important.

“I’ve heard that before, about was I preoccupied,” he said. “Not at all, not at all. And to be honest with you, that’s an important function of working. It’s called respect for our country.”

Meanwhile, people in Puerto Rico continue to deal with issues that are slowing down the recovery process like widespread power outages, damaged homes and flooding.

Officials from all over the U.S. are on a mission to help the storm-ravaged island, including the New York Fire Department.

“We’re assisting the red cross in the delivery of essential stuff that needs to be delivered and to make sure that it gets there,” one firefighter said.

As for Hurricane Maria, it has weakened to a category one storm, but it’s expected to bring dangerous tropical storm conditions in the east coast, including heavy rains and flooding.

(KXAN) -- Some counties in some U.S. states are finding they don't have enough COVID-19 vaccine supply to go around, while others have too much with too little demand. And vote results in the 2020 presidential election have more to do with it than you might guess.

While many factors likely contribute to vaccine availability nationwide, states and counties with high concentrations of people who voted to re-election former President Donald Trump are the most likely to have adults who are vaccine-hesitant, according to survey and vaccine administration data recently examined by the New York Times.

Jocelyn White's impact reached far beyond just those in the DFW broadcasting community. Not only was she an award-winning broadcaster, most recently on Designing Texas, but she was also a prominent figure in the North Texas charity world.

The lawyer / pastor team of Rob Cain and Pastor Richie Butler started Together We Dine to help people listen and learn about race in America.

All US adults should be eligible for vaccines Monday, according to Biden’s deadline