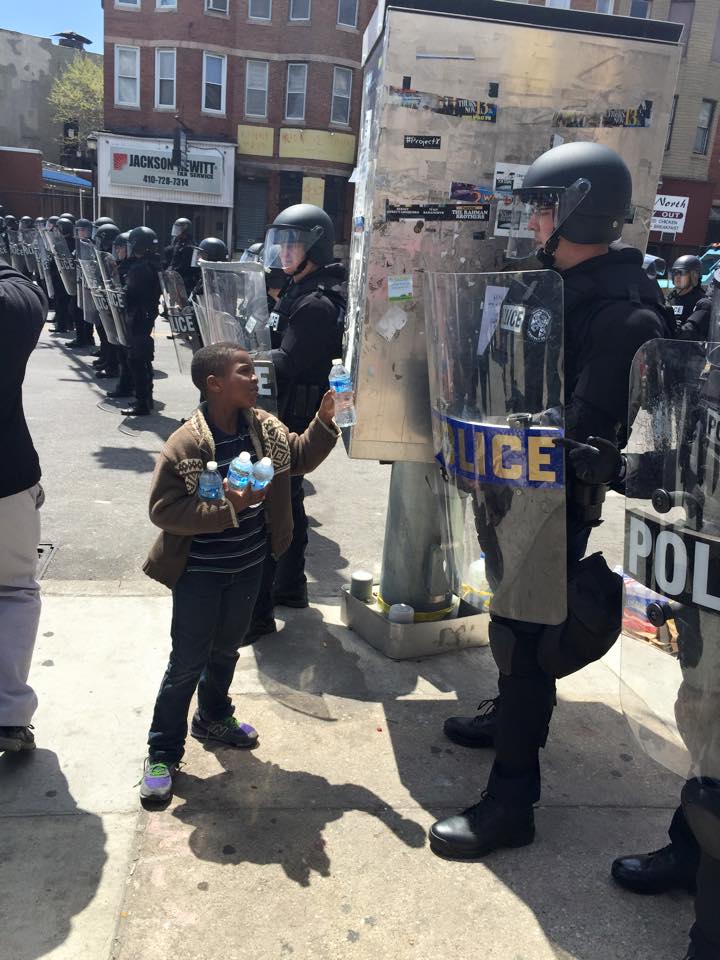 BALTIMORE – As violent protests escalate across Baltimore, one picture is touching hearts. It shows a little boy handing bottled water to officers armed in riot gear.

Bishop M Cromartie posted it to his Facebook page Tuesday with the caption, “One of many pictures that I captured today in the midst of helping clean up the city and it speaks VOLUMES.”

“This picture is starting to spread. Thanks for using social media to show a positive side to these current events,” Lamont Franklin commented.

You’ve no doubt seen the disturbing images of looters attacking officers, burning down buildings and the viral video of a mother smacking her son for taking part in the chaos. But there are tons of PEACEFUL protests across “Charm City.”

Here’s a look at some of the truly touching images.

This guy is leading the group songs. Got the group belting out "Lean On Me" now. "Y'all sound amazing!" pic.twitter.com/8gsqZd0G6g

Atmosphere on north ave and Penn ranging from street party to sermon to confrontation throughout the day #Baltimore pic.twitter.com/DfvY93qn7W

Large group of volunteers cleaning up that burnt out CVS in Baltimore pic.twitter.com/84BVzu7SWS

This is Jason Butler. He showed up this morning to clean up a devastated neighborhood #BaltimoreRiots pic.twitter.com/A6jFFDLphZ

Students and community unite to clean the street near new NAACP office in #FreddieGray's#Baltimore neighborhood. pic.twitter.com/nuZMRaqNMZ

Across the street a large group works to fill a dumpster with the debris from the CVS. pic.twitter.com/UYKEJdWkZ9

Folks have come to support #FreddieGray, standing across the street from the viewing. Baltimore. pic.twitter.com/hxJwvKaauN

The Asian Giant Hornet: What you need to know.

7 Signs You Grew Up in DFW