(CNN) — For the second time in a week, a noose was found on Smithsonian grounds. This time, at the National Museum of African-American History and Culture.

The noose was found Wednesday in the history galleries of the Washington museum, which was opened last year by President Barack Obama.

The discovery “is a painful reminder of the challenges that African-Americans continue to face,” Lonnie Bunch, the museum’s founding director, said in a statement posted on Twitter.

“This was a horrible act, but it is a stark reminder of why our work is so important.” 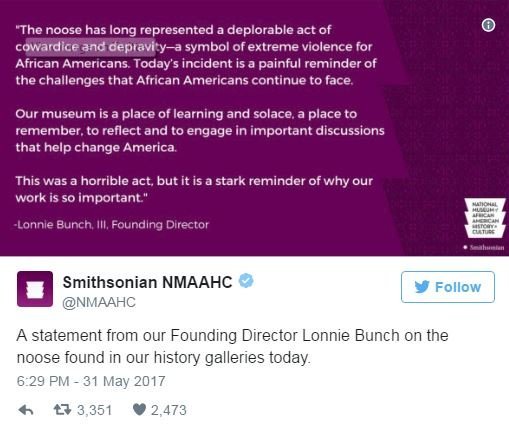 The facility, part of the Smithsonian Institution, is the “only national museum devoted exclusively to the documentation of African American life, history, and culture,” its website says.

Asked about the discovery of a noose, US Park Police said it was investigating “a case of that nature” but did not provide further details.

On Friday, a Smithsonian police officer reportedly found a noose hanging from a tree while making security checks on the grounds.

Nooses are often associated with the historic lynchings of African-Americans, and public displays of nooses are typically viewed as racist acts.

MINNEAPOLIS (AP) — The mayor of Minneapolis called Wednesday for criminal charges against the white police officer seen on video kneeling against the neck of a handcuffed black man who complained that he could not breathe and died in police custody.

Based on the video, Mayor Jacob Frey said officer Derek Chauvin should be charged in the death of George Floyd. The footage recorded by a bystander shows Chauvin with his knee on Floyd's neck as Floyd gasps for breath on the ground with his face against the pavement. The officer does not move for at least eight minutes, even after Floyd stops speaking and moving.

WASHINGTON (AP) — The U.S. economy shrank at an even faster pace than initially estimated in the first three months of this year with economists continuing to expect a far worse outcome in the current April-June quarter.

The Commerce Department reported Thursday that the gross domestic product, the broadest measure of economic health, fell at an annual rate of 5% in the first quarter, a bigger decline than the 4.8% drop first estimated a month ago.