NEW YORK, NY – Minnesota Vikings running back Adrian Peterson will be reinstated as an active player by the NFL on Friday, the 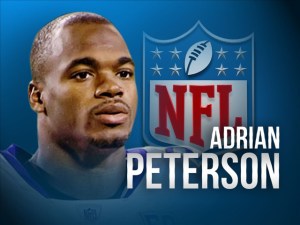 The NFL suspended the 30-year-old football star in November over allegations that last May he disciplined his son, who was 4 at the time, too harshly with a “switch,” or thin stick.

In a letter, NFL Commissioner Roger Goodell told Peterson that his continued participation in the league was contingent on a number of requirements, including that he maintain “an ongoing program of counseling and treatment as recommended by medical advisers,” the NFL said Thursday.

Also required of Peterson: Avoiding “any further conduct that violates the (NFL’s) personal conduct policy or other NFL policies.”

“Any further violation of the personal conduct policy by Peterson would result in additional discipline, which could include suspension without pay or banishment from the NFL,” the league said in a statement.

Peterson played in one game last season, a 35-6 win against St. Louis in September, before the league put him on an exempt list September 17 — keeping him off the field with pay — in light of his indictment that month in the case.

Initially charged with felony child abuse, Peterson pleaded no contest to misdemeanor reckless assault in November in Texas. The NFL then suspended him without pay and he lost his appeal of that sanction the next month. In February, a Minnesota district court judge vacated the decision that upheld his suspension, making Peterson eligible for reinstatement.

The Vikings issued a brief statement in which they said they “look forward to Adrian rejoining the Vikings.”

The next Vikings’ organized team activities begin in late May. It is unclear whether Peterson will attend. He has been unhappy with how the Vikings have handled the matter.

Though Peterson dodged jail time with his no-contest plea, he received probation, community service and a $4,000 fine. He also will take parenting classes.

“I truly regret this incident,” Peterson said after accepting the deal. “I stand here and I take full responsibility for my actions. I love my son more than any one of you can even imagine.”

Peterson is considered one of the best running backs in the NFL. In 2011 he signed a seven-year contract worth more than $100 million with the Vikings, who were 7-9 last season and failed to make the playoffs.

In eight seasons, including last year’s abbreviated year, he has rushed for 10,190 yards and averaged a strong 5.0 yards per carry.

‘The Vampire Diaries’: Is it Time to Make Bonnie Bisexual?