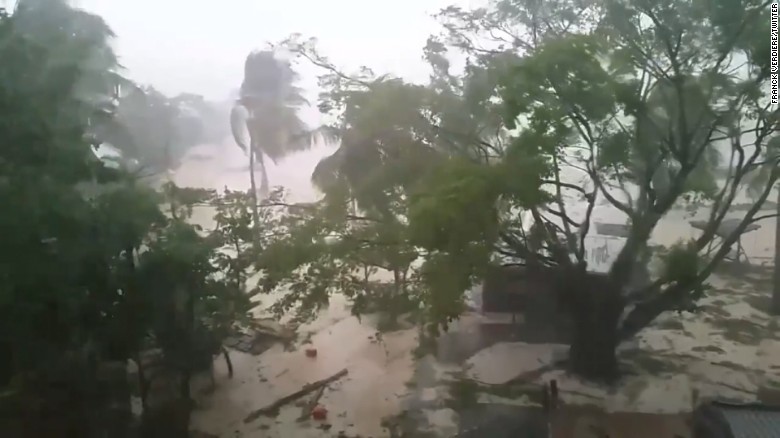 (CNN) — Though summer officially ended almost two weeks ago, hurricane season is still in full swing, with a new storm forming in the southwestern Caribbean near Central America.

Despite being more than 1,000 miles away from the US and only in its infancy, the storm could reach the Gulf Coast by this weekend. Those with Columbus Day weekend plans anywhere along the eastern half of the Gulf Coast region should pay very close attention as a hurricane landfall is looking very possible.

Tropical Depression Sixteen, as it was named by the National Hurricane Center at 11 a.m. on Wednesday, is located approximately 200 miles from the Nicaragua/Honduras border and has sustained winds of 35 mph.

The system is expected to strengthen into Tropical Storm Nate later today before moving into Nicaragua Thursday morning and over eastern Honduras later in the day.

Extreme rainfall totals of 15 to 20 inches are possible in Nicaragua, with up to 8 inches in Honduras, which could bring life-threatening flash floods and mudslides through Friday morning.

Once Nate moves back over the warm waters of the western Caribbean, more strengthening is expected, as well as an increase in forward speed. The forecast brings Nate through the Yucatan Channel between Mexico and Cuba, limiting any land interaction which would otherwise weaken the storm. If Nate were to move over the Yucatan Peninsula or western Cuba, it could prevent the system from becoming a hurricane.

The water is warm enough to allow for Nate to potentially see “rapid intensification” — meaning conditions are just right and would allow for tropical cyclones to gain strength very quickly.

“Rapid intensification is a possibility over the northwestern Caribbean or southern Gulf of Mexico while the system is traversing rather warm and deep waters,” the National Hurricane Center said Wednesday.

Hurricanes Harvey, Irma, Jose, and Maria all underwent rapid intensification on their way to becoming major hurricanes earlier this season.

Though it looks like a landfalling storm is likely along the Gulf Coast this weekend, the exact location is still yet to be determined. There is considerable spread in the forecast models, with potential landfalls from central Louisiana to Florida’s Big Bend region.

The official forecast for Nate has landfall near Panama City, Florida, on Sunday with winds of 80 mph, which would make Nate a Category 1 hurricane.

The prospects of another hurricane landfall are troubling, coming so quickly after back-to-back-to-back disasters in Harvey, Irma, and Maria. In fact, September 2017 was deemed the “most active month on record” for tropical systems in the Atlantic basin by the National Hurricane Center.

After having a named tropical system active in the Atlantic for over 37 consecutive days, the third-longest streak on record, the region finally had a break beginning on Sunday, with no storms. Unfortunately it looks like that break lasted only three days.