WASHINGTON, D.C. -- It's the issue the NFL and one team in particular keep getting beat up about. Lately, the Washington Redskins have become more known for the controversy surrounding their team name than for anything they've done on the field.

But a new poll shows that all the effort and commotion to get them to change that name is really all for nothing. 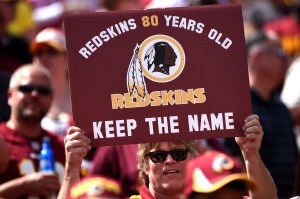 According to a new Washington Post poll, 9 out of 10 Native Americans are NOT offended by the team's name.

Even more, 7 out of 10 Native Americans polled didn't even feel the word "redskin" was disrespectful to Indians. The survey included 504 people and actually match the results of a separate survey taken in 2004.

Still, some Native American leadership groups criticize the study noting that it didn't include children "who are in a particularly vulnerable position to be bullied by the NFL. It is long overdue for Native Americans to be treated not as mascots or targets of slurs, but instead as equals."

It looks like Dan Snyder and supporters of the Redskins name can do a little dancing in the end zone. The name appears to be here to stay, for now.

BEIJING (AP) — The coronavirus was found on ice cream produced in eastern China, prompting a recall of cartons from the same batch, according to the government.

The Daqiaodao Food Co., Ltd. in Tianjin, adjacent to Beijing, was sealed and its employees were being tested for the coronavirus, a city government statement said. There was no indication anyone had contracted the virus from the ice cream.

Anne Chow, CEO of AT&T Business talks about never giving up despite being rejecting