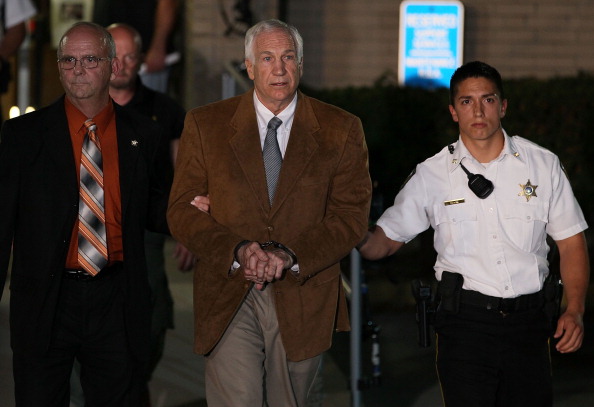 PHILADELPHIA — A man who says he was molested by Jerry Sandusky has filed a private criminal complaint in Pennsylvania, trying to force prosecutors to reopen their investigation into the former coach and take him, once again, to trial.

The man, who we’re calling Victim X, told his story to CNN. “A big part of the healing process is to face your accuser,” he said.

Victim X said Sandusky molested him in 1988 when he was a junior in high school. He was a top recruit in football and baseball who was being sought by several schools, and decided to attend a weeklong football camp at Penn State. There, he met Sandusky, and said that he was molested twice by the then-defensive coordinator: once in the showers in the assistant coaches locker room and once in Sandusky’s office.

Both places are well known to investigators as places where other victims were abused several times. The showers in particular were a main setting and focal point of Sandusky’s trial. It’s in those showers that at least four of Sandusky’s victims claim to have been abused, and it’s the place where former assistant coach Mike McQueary said he witnessed Sandusky abusing a different boy in 2001.

By January 1989, Victim X said his life of promise had spiraled into one of vices he couldn’t shake, which he blames on the abuse. “From drinking and drugging, destruction, confusion, anger and rage,” he said. “One episode triggers another one and it becomes an everlasting nightmare.” In his 20s, he racked up a rap sheet that included drug and theft charges, and later a killing that he pleaded down to manslaughter.

All those years, he never told a soul that Sandusky had touched him, until November 2011, as Sandusky’s arrest in other cases was making national headlines and leading news coverage for days. He watched from his jail cell where he was serving time on a parole violation and decided to call his lawyer. Within days, he said, investigators from the Pennsylvania State Attorney General’s Office showed up and conducted a four-hour interview, during which he drew a diagram of the football facilities that his lawyers say police found to be credible.

Even though his story, he said, was initially verified by police, it wasn’t part of the original case of 10 boys against Sandusky. Instead, it was shelved for the possibility of a “round two” prosecution that was not pursued because Sandusky is serving a de facto life sentence; at age 68 he was sentenced to at least 30 years in prison for 45 counts of child sexual abuse.

“They told me that I would be part of the second criminal trial the following year, but they never had a second trial,” Victim X said.

“What we’re asking for is his day in court against Jerry Sandusky,” said Victim X’s attorney, Mitchell Garabedian, in Boston. “It’s not unusual for victims to take this avenue to want to proceed criminally against a person who effectively has a life sentence. A victim has their right to a day in court. A crime was committed against him.”

Garabedian said he believes it’s up to the Attorney General’s Office whether it pursues another criminal case, but Garabedian said it’s important to Victim X, who was an aspiring athlete, to finally face his abuser.

Renee Martin, a spokeswoman for the Pennsylvania Attorney General’s Office, told CNN that while the statute of limitations may have run out in Victim X’s case, the office is “talking to the victim’s attorney and the district attorney and working through the issues together because of the importance of the case.”

More than 30 victims in total have come forward, although 10 cases were tried. Most of the victims have settled with Penn State, but a few have refused to settle and Victim X is one of them. He and his family said they didn’t feel Penn State’s settlement offer was fair, given the fact that three university officials have been charged with knowing about abuse in 1998 and in 2001, and not doing enough to stop it.

The man and his family said that if Sandusky’s crimes had been properly reported earlier, his abuse would have been discovered far sooner, and his case would have fallen within the civil statute of limitations. Now, 26 years later, it does not, and they are in a weaker bargaining position for a monetary settlement. They are also upset that no official from Penn State ever attended a meeting with them or apologized. Ken Feinberg, who was hired on the university’s behalf to settle with victims, was the only person to meet with the family.

“The main point for me is coming forward and learning how to live with it on a day-to-day basis,” he said. “I don’t want to hide anything.”

The argan oil used for beauty is different from the one used for cooking, so be sure you know whether you’re buying cosmetic or culinary argan oil.

Distressed jeans have become a wardrobe staple for those curating a relaxed but chic aesthetic.

Train like the top athletes in the world at Dallas’ …

You have to try this Dallas eatery that makes Vietnamese …

Travel to the happiest place on earth at the Disneyland …

How to help Dallas Animal Services save more pets …

Survey: This is how Texas loves their chicken wings

Police: Man arrested in taking of monkeys from Dallas …

What to expect from next week’s weather in North …

These Texas cities have the best Mexican food in …

Texas eatery has the most unique tater tots in US