FRISCO, TX -- A month after news of the deaths of Sumeet and Pallavi Dhawan, the Collin County medical examiner has ruled the wife killed herself and the husband was murdered.

You'll remember, Pallavi's body was found in the pool. The medical examiner determined her cause of death was a combination of a lethal amount of sleeping pills along with drowning.

Sumeet was found in the couple's bedroom and suffered blunt force head injuries. Sleeping pills were also found in his system, but not enough to kill him. His death is being ruled a homicide.

Tragedy first struck this family in January when the couple's son, Arnav, was found dead in their Frisco home.

The medical examiner concluded the 10-year-old likely died of natural causes, but Frisco cops suspected foul play and Pallavi was 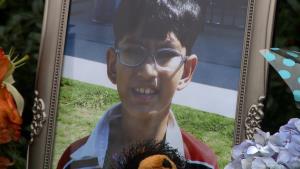 charged with her son's murder.

A suicide note was found at the scene, but police aren't releasing information about what it said.

For now, these new details only leave us with more questions about what really happened behind this family's walls.

HARRISBURG, Pa. (AP) — A Pennsylvania woman facing charges that she helped steal a laptop from the office of House Speaker Nancy Pelosi during the attack on the U.S. Capitol will be released from jail, a federal judge decided Thursday.

U.S. Magistrate Judge Martin Carlson released Riley June Williams into the custody of her mother, with travel restrictions, and instructed her to appear Monday in federal court in Washington to continue her case. Williams, 22, of Harrisburg, is accused of theft, obstruction and trespassing, as well as violent entry and disorderly conduct on Capitol grounds.

WASHINGTON (NewsNation Now) — In a day revolving around an oath of office, the spoken words of a young American poet earned the spotlight this inauguration.

Amanda Gorman recited her poem "The Hill We Climb" at the swearing-in ceremony of President Joe Biden and Vice President Kamala Harris Wednesday. The 22-year-old used her words to embolden Americans to confront grief, to dare to hope and to act with mercy and love.

AUSTIN (KXAN) — Gov. Greg Abbott will discuss his legislative priorities as they relate to "ensuring a safer future for the state Texas," at 12:15 p.m. Thursday.

The governor is hosting a roundtable discussion with law enforcement and other officials in Austin, and then he'll hold a short press conference afterward, his office said in a press release. Those participating in the roundtable include:

Psaki vows to bring ‘transparency and truth’ to press briefings