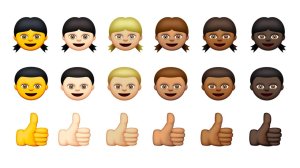 NEW YORK — Emojis are finally getting more diverse. In Apple’s next update of emoji icons, a number of the tiny cartoon people are now available in six different skin tones.

The male and female faces, as well as thumbs up/thumbs down icons, will be available in the different colors. Other people emoji, such as princesses and construction workers, will also get more diverse options. Tapping and holding on an emoji person will bring up the new skin-tone variations.

The diverse people are just some of the 300 new emojis included in the latest developer version of iOS 8.3. The new icons won’t be available to the public until the update is released later this year.

Apple pledged to increase the diversity in its emoji keyboard last March, after a public outcry over the limited options for people of color. A petition at DoSomething.org collected thousands of signatures. Miley Cyrus even tweeted about it, helping it to go viral on Twitter.

The current illustrated icons include same-sex couples but no black characters. There is an Asian man wearing a traditional Chinese cap and an Indian man in a turban, but the rest of the emoji population is light-skinned.

Creating a more diverse emoji selection wasn’t as easy as releasing a new iOS update. The keyboard of illustrated icons is based on Unicode, the standard for text, numbers and emojis across all platforms. Emoji originated in Japan and were added to the Unicode Standard in 2010. Apple first included them natively in iOS in 2011.

“Apple supports and cares deeply about diversity, and is working with The Unicode Consortium to update the standard so that it better represents diversity for all of us,” said an Apple spokesperson.

To come up with the expanded palette of skin tones, Unicode used the Fitzpatrick scale, which was originally developed by dermatologists to classify different types of skin.

Apple is also adding 32 new country flags and an expanded selection of family icons that include more same-sex couples.

Amazing hunk of love: Bear is looking for the right forever home