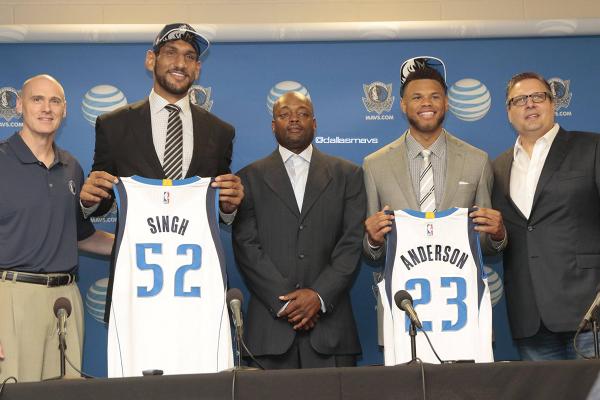 Even with Anderson being the first round pick, the acquisition of Singh casts a larger shadow. Not only is Singh a historic signing because he’s the first Indian-born player to ever be drafted in the NBA but at 7’2” and 290 pounds this unknown draftee is hard to miss.

On Monday, Singh shared his excitement with the world via Facebook, taking a pic of his new locker and calling it “a dream come true.”

He’s also getting accustomed to his newfound fame.

It shouldn’t take long for Singh to make friends on the team since he’s represented by the same agents who work for current Mav Chandler Parsons and (fingers crossed) future Mav DeAndre Jordan.

As of now, Singh is considered a project. He’ll play with the Mavs’ Summer League team, then with the Texas Legends, the Frisco-based D-league team. The 19-year-old will have plenty of time to get accustomed to life on and off the court.

Hmm, an unknown 7-foot foreigner brought in by the Mavs? Where have we heard this story before?

And just like Dirk, the Mavs hope Satnam has other teams “Singh-ing” the blues in the future.

Deadline to complete the 2020 census extended until Fall

Destination Texas: The bluebonnets and retro drive-in theaters of Ennis

Reunion Tower joined social media and went dark for the first time in 42 years, but was #BlackoutTuesday counterproductive?