PLANO, TX —  Despite damning new evidence released about the last person seen with Christina Morris, Plano PD is not calling Enrique Arochi  a suspect in her disappearance.

According to a search warrant, police have conducted several interviews with Arochi since September, retraced his movements, and found a number of contradictions.

Detectives concluded the “most likely” way Morris could have left the parking garage undetected was in Arochi’s car.

Grainy surveillance video shows them walking into the garage in the early morning hours of August 30. 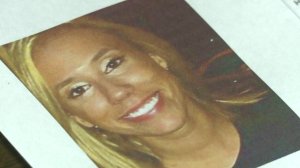 Cops searched Arochi’s 2010 Chevy Camaro in September for DNA evidence, but have not revealed if anything was found.

Detectives say Arochi lied about where he parked his car that night, as well as where he went after he left the parking garage. Tolltag records contradict his version of events.

Under questioning, Arochi was unable to explain why his phone records show text messages and calls to Morris’ boyfriend Hunter Foster at 3:50, 3:53 and 3:55 — all just minutes before Arochi and Morris walked into the garage.

Even more disturbing, the search warrant says a co-worker told investigators that — the day after Morris disappeared — Arochi showed up at work and “looked like s***,” was walking with a limp, complained of bruised ribs and had a bite mark on his arm.  The co-worker said Arochi told him he was in a fight at the Shops at Legacy.

According to the warrant, Arochi also had damage to his car repaired just days after Morris disappeared. Arochi admitted to taking Adderall, drinking 10 shots of rum and 3-5 beers with Morris and friends on the last night she was seen alive.

Plano P-D told NewsFix Tuesday that Arochi is not a “suspect” or a “person of interest” in this case.

Highest-rated restaurants in Dallas, according to …

Events in North Texas for Fourth of July Weekend