This is an archived article and the information in the article may be outdated. Please look at the time stamp on the story to see when it was last updated.
Kraft Heinz is recalling close to 70,000 jars of Taco Bell Cheese Dip because of a risk of botulism.
The company says the decision was made after discovering the 15-oz. Taco Bell Salsa Con Queso Mild Cheese Dip showed signs of product separation. This could lead to the growth of the bacteria that causes botulism. It’s a rare but potentially fatal food poisoning. 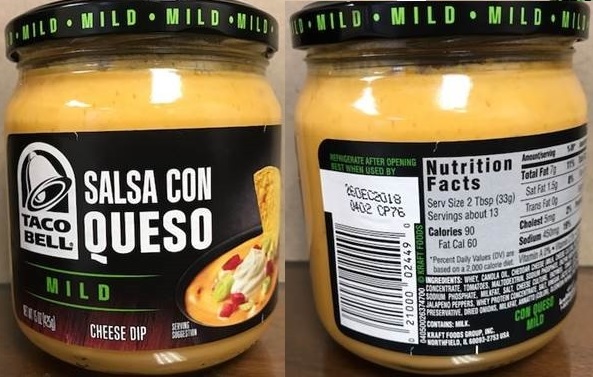 The jarred dips with these ‘best when used by’ dates are part of the recall:
October 31, 2018
November 1, 2018
December 26, 2018
December 27, 2018
January 23, 2019
Kraft Heinz’s voluntarily recall notice says no complaints or illnesses have been reported. Customers are encouraged to not eat the dip and return to store of sale for exchange or refund.
This is just the latest in a recent rash of recalls. Kellogg’s recalled Honey Smacks breakfast cereal. Campbell Soup recalled Goldfish Crackers. Mondelez International recalled Ritz Crackers. All recalls were due to risks of salmonella.

The US Centers for Disease Control and Prevention said Thursday that 27 more people have gotten sick in a multistate outbreak of salmonella illness linked to recalled Kellogg’s Honey Smacks cereal. This brings the total number of illnesses to 100 people since March, although the outbreak was not announced until June.

Symptoms of salmonella infection include diarrhea, fever and abdominal cramps and typically present 12 to 72 hours after exposure to the bacteria. The first cases of illness in this outbreak began with symptoms on March 3, and the most recent individuals began feeling ill on July 2.

Symptoms last about four to seven days, and although most people improve without treatment, some may require hospitalization because of severe diarrhea. Thirty people have been hospitalized in this outbreak.

Salmonella can also travel from the intestines to the bloodstream and ultimately the rest of the body. Death is rare but may occur if the person is not treated quickly with antibiotics. No deaths have been reported in this outbreak.

Florida and Colorado are the latest states to report illnesses as part of the outbreak, bringing the total number of states affected to 33.

The US Food and Drug Administration urged consumers on Thursday to avoid eating and retailers to not sell Kellogg’s Honey Smacks cereal because of the chance of salmonella contamination.

In addition, the agency has advised the public to report any sales of the cereal to the FDA Consumer Complaint Coordinator in their area.

The CDC and the FDA are working with state and local health officials across the country to investigate the source of the contamination.

The United States Department of Agriculture’s Food Safety and Inspection Service issued a public health alert Friday for foods that contain whey powder. Whey powder is an ingredient regulated by the US Food and Drug Administration and is used in a number of foods.

According to a 2017 study, whey powder is used to modify texture, thicken foods, gel foods and to enhance solubility and transportability of foods.

Symptoms of salmonella begin 12 to 72 hours after a person is infected and include diarrhea, fever and abdominal cramping. This can last about four to seven days, and most individuals recover without treatment. However, those who develop severe diarrhea may need to be hospitalized. Those who are very young, who are very old or who have compromised immune systems are most at risk for complications and severe cases of illness.

No illnesses have been reported so far due to these recalls but consumers should not eat any of the recalled foods because they could make you sick.

All products that list whey powder as an ingredient on the packaging are not at risk.

Here’s a list of recalls due to whey powder:

Whey powder is an ingredient in a seasoning “applied to” these items, according to the company.

Flowers Foods recalled Swiss rolls because they may be contaminated with salmonella. The ingredient whey powder was recalled for possible contamination. There have been no reports of illness from Swiss rolls, according to the company.

Pinnacle Foods, Inc recalled 15.25 oz Hungry Man Chipotle BBQ Sauced Boneless Chicken Wyngz with a best buy date of 9/6/19. The recalled frozen microwavable dinners have the establishment number “EST. P138” or “P-138” on the package. They were shipped to retailers in Massachusetts, Pennsylvania and Virginia.

The recall is due to whey powder used in ranch dressing that is a seasoning in the mashed potatoes and with the boneless chicken that are part of the meals.

These foods linked to ongoing outbreaks might make you sick

US health officials are warning people to avoid certain foods due to ongoing unrelated outbreaks of intestinal infections caused by bacteria, viruses and even parasites lurking in some of our food.

Here’s what to stay away from:

Hy-Vee, a Midwestern grocery store chain, has recalled a pasta salad that might be linked to at least 20 people getting sick from salmonella. Hy-Vee, based in Iowa, sold the 1-pound and 3-pound plastic containers of Spring Pasta Salad in eight states.

The states are Iowa, Minnesota, Nebraska and South Dakota — where the salmonella illnesses were reported — and Illinois, Missouri, Kansas and Wisconsin.

The product was produced between June 1 and July 13. The packages have expiration dates between June 22 and August 3.

Symptoms of salmonella begin 12 to 72 hours after a person is infected and include diarrhea, fever and abdominal cramping. This can last about four to seven days, and most individuals recover without treatment. However, those who develop severe diarrhea may need to be hospitalized. Those who are very young, who are very old or who have compromised immune systems are most at risk for complications and severe cases of illness.

Salmonella is the culprit in 90 illnesses linked to raw turkey products, according to the Centers for Disease Control and Prevention and the US Department of Agriculture.

The illnesses have been reported in 26 states since November. But health officials have not identified a brand, product or supplier as the source of the outbreak.

Patients who have been interviewed reported eating “different types and brands of turkey products purchased from many different locations. Two ill people lived in a household where raw turkey pet food was fed to pets,” the CDC said.

In addition, samples of raw turkey pet food, raw turkey products and live turkeys have tested positive for the outbreak strain of salmonella, which could mean the outbreak is “widespread in the turkey industry,” the CDC said.

Put down the fork and step away from cut melon or fruit salad mixes that contain it.

The US Food and Drug Administration is warning people in 23 states that the fruit may be contaminated with salmonella.

The outbreak has affected 60 people mostly in five Midwestern states, with about half of them hospitalized.

The fruits were sold in stores such as Walmart, Kroger, Walgreens, Sprouts Farmers Market, Costco and Whole Foods/Amazon.

As a precaution, McDonald’s has stopped selling salads in 3,000 locations in 14 states to try to contain an outbreak of cyclospora illness.

To date, 163 cases have been confirmed in 10 states since May 1, according to the CDC.

The cyclospora parasite causes intestinal illness as a result of consuming contaminated food or water. Symptoms can begin a week or more after consuming the parasite. They include diarrhea and frequent, sometimes explosive bowel movements, according to the CDC. Those who are infected might also experience loss of appetite, weight loss, stomach cramps or pain, nausea, gas and fatigue. Vomiting, headache, fever, body aches and flu-like symptoms can also occur.

The illness can last from a few days to a few months, and patients might feel better but then get worse again. Patients can be treated with antibiotics.

Before you grab something off that vegetable tray, make sure it hasn’t been recalled.

The FDA is investigating at least 237 cases of cyclospora illnesses linked to recalled Del Monte Fresh vegetable trays. The trays contained broccoli, cauliflower, carrots and dill dip, and they were sold in Iowa, Minnesota, Wisconsin, Illinois and Indiana.

“FDA has not identified which of the ingredients is the vehicle for this outbreak; each component of these vegetable trays is under consideration,” the agency said.

Avoid eating fresh crab meat from Venezuela. That’s the advice from the FDA due to an outbreak of Vibrio parahaemolyticus that started in April. In all, 12 illnesses have been reported in Maryland, Pennsylvania, Louisiana and the District of Columbia.

“This product is commonly found in plastic tubs and may be labeled as ‘pre-cooked,’ ” the FDA said in its outbreak announcement.