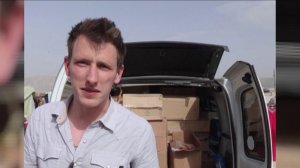 ISIS held Kassig as a hostage and in previous communications had threatened his life.

The video shows the aftermath of a beheading in which the victim is not clearly recognizable.

President Barack Obama confirmed the 26-year-old’s beheading, saying Kassig “was taken from us in an act of pure evil by a terrorist group that the world rightly associates with inhumanity.”

Kassig, who converted to Islam in captivity, also went by the name Abdul-Rahman Kassig.

He first traveled to the Middle East as a U.S. soldier and returned as a medical worker, feeling compelled to help victims of war.

He did aid work in Syria, where he was captured. He was held hostage for over a year.

Kassig’s parents, Ed and Paula Kassig, acknowledged the reports of their son’s death in a statement and asked for privacy.

“While ISIL revels in the slaughter of innocents, including Muslims, and is bent only on sowing death and destruction, Abdul-Rahman was a humanitarian who worked to save the lives of Syrians injured and dispossessed by the Syrian conflict,” Obama said.

A familiar figure appeared in Sunday’s beheading video, dressed in all black and speaking with what sounds like an English accent.

A man fitting the same description appeared in previous videos of the apparent beheadings of other Westerners.

But this recording is different from previously released ones. It is longer, almost 16 minutes, and does not include a statement by the victim, as previous ones had.

And it is utterly brutal, showing in graphic detail the beheadings of other men, whom militants claim are pilots for the Syrian government.

The narration spends much time on ISIS’ history and the figure taunts Obama, saying he will have to return troops to Iraq in greater numbers than before.

And for the first time in such a video, the speaker names the place where he is standing with the victim — in the town of Dabiq in Aleppo province, Syria.

DALLAS (KDAF) - During the pandemic, in-person meetings have turned virtual.

It has completely revolutionized how we communicate with each other today.

HARRISBURG, Pa. (AP) — A Pennsylvania woman facing charges that she helped steal a laptop from the office of House Speaker Nancy Pelosi during the attack on the U.S. Capitol will be released from jail, a federal judge decided Thursday.

U.S. Magistrate Judge Martin Carlson released Riley June Williams into the custody of her mother, with travel restrictions, and instructed her to appear Monday in federal court in Washington to continue her case. Williams, 22, of Harrisburg, is accused of theft, obstruction and trespassing, as well as violent entry and disorderly conduct on Capitol grounds.

WASHINGTON (NewsNation Now) — In a day revolving around an oath of office, the spoken words of a young American poet earned the spotlight this inauguration.

Amanda Gorman recited her poem "The Hill We Climb" at the swearing-in ceremony of President Joe Biden and Vice President Kamala Harris Wednesday. The 22-year-old used her words to embolden Americans to confront grief, to dare to hope and to act with mercy and love.