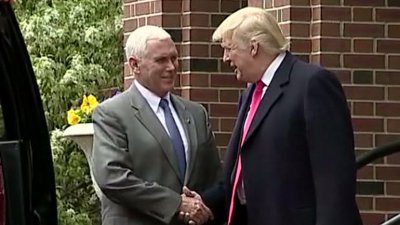 INDIANAPOLIS, Ind.— A source with Donald Trump’s Indiana campaign confirms to FOX59 Trump has selected Gov. Mike Pence as his running mate in the 2016 presidential campaign.

Trump will officially announce his vice presidential pick at 11 a.m. Friday at the New York Hilton Midtown in Manhattan.

Speculation heightened Thursday as Pence’s deputy campaign manager, Marc Lotter, was spotted on a flight from Indy to NYC.

News correspondent Major Garrett, who was in Indianapolis this week for Donald Trump’s visit, said that he was on a flight out of Indianapolis to New York with Marc Lotter, the deputy manager for Gov. Mike Pence’s reelection campaign.

Garrett also said Lotter confirmed to him that Pence had purchased advertising time for his reelection and noted that the purchases are refundable. He added the hashtag #headfakes to the tweet.

Pence has emerged as the front runner as Trump considers his options for a running mate. Pence hosted Trump at the Governor’s Residence Wednesday morning following Trump’s rally in Westfield, Indiana Tuesday evening.

The report in part read:

In addition to testing the men’s chemistry together, Trump was reportedly impressed with Pence’s calm demeanor, his experience on Capitol Hill and as a governor, and Pence’s potential to assist Trump in governing, should the ticket win in November.

WASHINGTON -- Supreme Court Justice Ruth Bader Ginsburg, a diminutive yet towering women’s rights champion who became the court’s second female justice, died Friday at her home in Washington. She was 87.

HOUSTON (AP) — Sitting across from her lawyer at an immigration detention center in rural Georgia, Mileidy Cardentey Fernandez unbuttoned her jail jumpsuit to show the scars on her abdomen. There were three small, circular marks.

The 39-year-old woman from Cuba was told only that she would undergo an operation to treat her ovarian cysts, but a month later, she's still not sure what procedure she got. After Cardentey repeatedly requested her medical records to find out, Irwin County Detention Center gave her more than 100 pages showing a diagnosis of cysts but nothing from the day of the surgery.

(NEXSTAR) -- Apple unveiled several new products earlier this week and rolled out iOS 14 for existing devices. However, one new iOS 14 feature is confusing some users.

What does the orange dot mean?

Amazon kicks off career fair with 33,000 work-from-home jobs up for grabs