DAYTON, TX – A city has to be known for something, and right now the small town of Dayton, Texas is making quite the name for itself with some big alligator captures.

On Wednesday, they may have snagged one of the biggest gators of all; it measured out at 13′ 8″ and weighed in at a whopping 900 pounds. It’s reportedly the largest gator ever captured alive in the state of Texas. 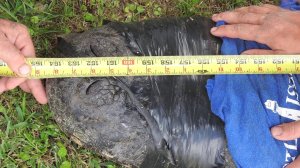 The alligator had to be removed from a wildlife refuge after people reported that it was getting a little too close for comfort. Just last month, a bow hunter killed an alligator near Dayton that measured 13′ 8 1/2″.

The gator that had the good fortune of being caught alive has been moved to a natural habitat in Beaumont, called Gator Country, where it’ll have plenty of room to stretch out on the 20-acre facility.

As of now he doesn’t have a name, but the owners of gator country are currently taking suggestions on their Facebook page. Too bad Big Tex is already taken.