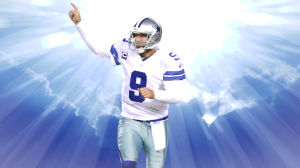 ARLINGTON, TX — The Cowboys woke up feeling good Monday morning. And why not? For the first time in over two months, these guys are winners again. And the victory, along with the return of Tony Romo, has spirits high!

Just a few weeks ago, defensive end Jeremy Mincey reminded folks that the team still had to play well because “Tony Romo isn’t Jesus,” but he backtracked yesterday telling reporters that Romo “is the savior of our season!”

Well, it only took Jesus three days to come back. The seven games Romo missed put Dallas in a big hole. But #9 is giving fans a reason for believing again!

Let’s do the math here. The Cowboys are just two games out of first place with six games left to play!

And according to the New York Times playoff prediction machine, Sunday’s win, along with losses by the Eagles and Redskins, quadrupled the Boys playoff chances!!! Wellll… from 1% to 4%, that is.

And they have a huge challenge ahead with the undefeated Panthers in town on Thanksgiving. But beating undefeated teams is nothing new for Tony Romo. He topped the 9 – 0 Colts in ’06 and the 13 – 0 Saints in ’09!

So, keep a little faith in the Boys, and see if the Cowboys savior can lead them to the Promised Land!